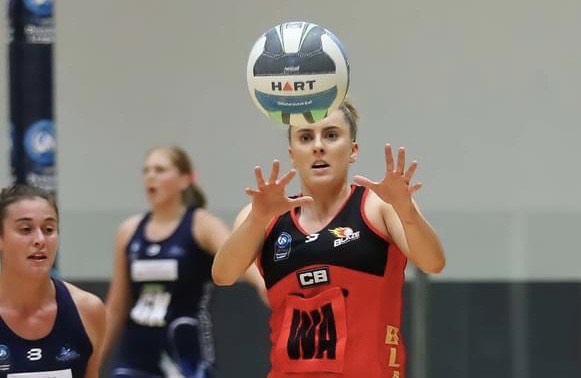 South Coast Blaze U23s had a slow start against Manly Warringah Sapphires last Wednesday. Blaze had the first centre pass but multiple turnovers from each team saw the ball go back and forth on court, with Sapphires finally sinking the first goal two and half minutes into the game. Some missed goals and errors from Blaze throughout the remaining part of the first quarter, helped Sapphires take an early lead, 6-12.

Strong defence from Bilyana Milevski at GK, Jessica Bowden at GD and Sharnee Behr at WD saw the score come within 2 goals half way through the second quarter. But some floating shots and passes from Blaze in the last 6 minutes helped push out the Sapphires lead to 9 at half time, with the score 17-26.

In the third quarter, Blaze fought back with Goal Shooter Ky-Mani Schwenke and Goal Attack Mia Evans getting into a rhythm, and Emily Dunn moving to WA half way through the quarter to feed the circle, with Captain Clare McCrohon out this game. The dynamic worked well with Blaze taking the quarter 13-11, leaving Sapphires only 7 ahead, 30-37.

In the last quarter Blaze didn’t give up, bringing the score within 2 goals with only three and a half minutes to go. But Sapphires hit back, turning over a couple of Blaze centre passes and a ball on the goal circle, to tie 15 all in the last quarter and take the win 45-52.

South Coast Blaze Opens started strongly against Manly Warringah Sapphires with the attack combination of Chaise Vassallo (WA), Katelyn Begley (C), Abbey McFadden (GA) and Kristina Brice (GS) working well together, going goal for goal. Poor passes and missed shots started to creep in to both teams’ games half way through the quarter, with the Sapphires managing to pull ahead 11-14 in the last couple of minutes.

In the second quarter Shelby Mallon came on at GA and Abbey McFadden moved to WA. The new combination hoped to see Blaze pick up the difference but Sapphires extended their lead by 1, with the score 23-27 at half time.

Brittany Berry subbed in at GS, giving Kristina Brice a short rest at the start of the third quarter before she re-entered the game again in the 12th minute. Brittany Berry then moved into GA. However these changes didn’t help Blaze, with a few missed goals and bad passes in the Blaze attack end, helping Sapphires grow their lead to 15, finishing the third quarter 36-51. With Sapphires holding strong, Blaze couldn’t find the heart to lift in the final quarter and ended up going down by 18, with the final score 50-68.