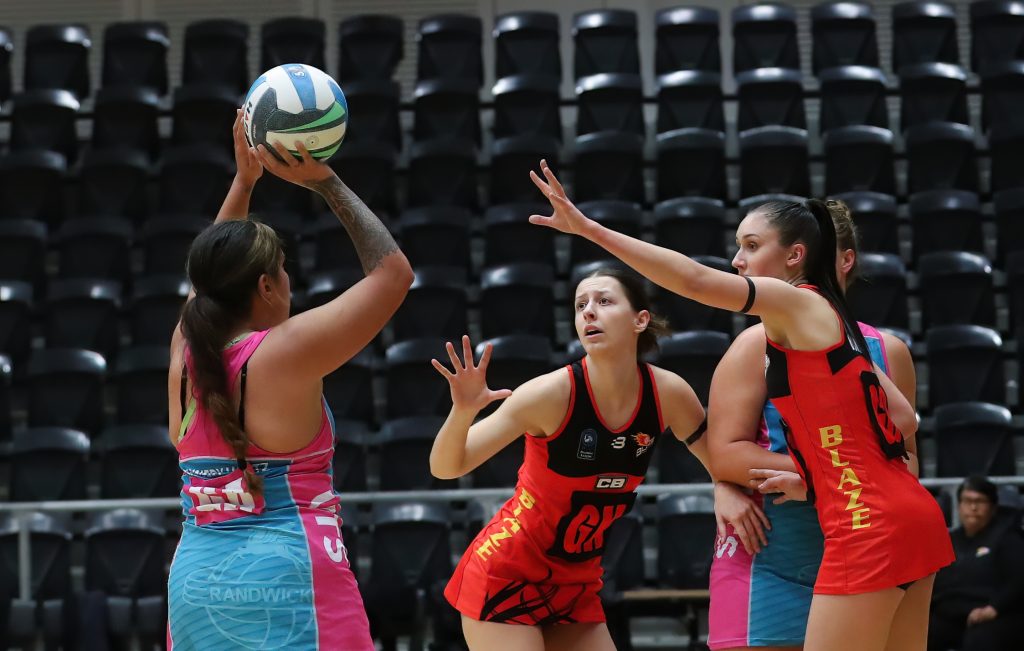 Blaze started off strong, with a couple of turnovers, including some by Bilyana Milevski at GK, seeing Blaze take a one point lead in the first quarter.

In the second quarter Blaze took an early lead with shooting pair GS Ky-Mani Schwenke and GA Emily Dunn capitalising off some Sparks attack errors and missed shots, defended strongly by Bilyana Mileveski (GK), Jessica Bowden (GD) and Sharnee Behr (WD). However, UTS managed to wrangle the score to within one again in the last three minutes and went goal for goal, with Blaze keeping its one goal lead going into the half 23-22.

Blaze continued centre for centre with Sparks early in the third quarter with Camden local and training partner Aimee Ladigran stepping up into GD, only her second game in the team this season. Unfortunately some rebounds off missed Blaze shots and turnovers in attack saw Sparks pull ahead by 5 towards the middle of the quarter. Head Coach Regan Tweddle, taking full advantage of rolling substitutions, put on fresh legs midway through the quarter with experienced player Jess Bowden going into GD and Illawarra young gun Mia Evans going into GA. Both players, had an immediate impact, with Bowden securing a turnover and Evans scoring some long shots to help Blaze bring back the score to within 3, with Blaze down 33-36 at third quarter.

The fourth quarter was a tussle with Blaze going all out to reign in the score and it looked like a come back was on the cards again. However they couldn’t peg it back against a determined Sparks, tying 12 all in the last quarter, with the final score 48-45. A well fought game but it just wasn’t the South Coast Blaze U23’s night

Blaze went goal for goal with UTS for the first half of the second quarter, but some poorly placed passes and positioning from the Blaze attack saw Sparks pull ahead by 6, with the score 30-24 at half time.

Sparks maintained their lead in the third and fourth quarter, with Blaze not able to claw back the goals. It’s another disappointing loss for the Opens who continue to start off strong but can’t hold on to bring home the win against the more established Premier League teams. With the Opens only going down by 10-15 goals in their past few games, there is some promise that the team can pull it together, and hunt down some more wins this season in their last 5 games.