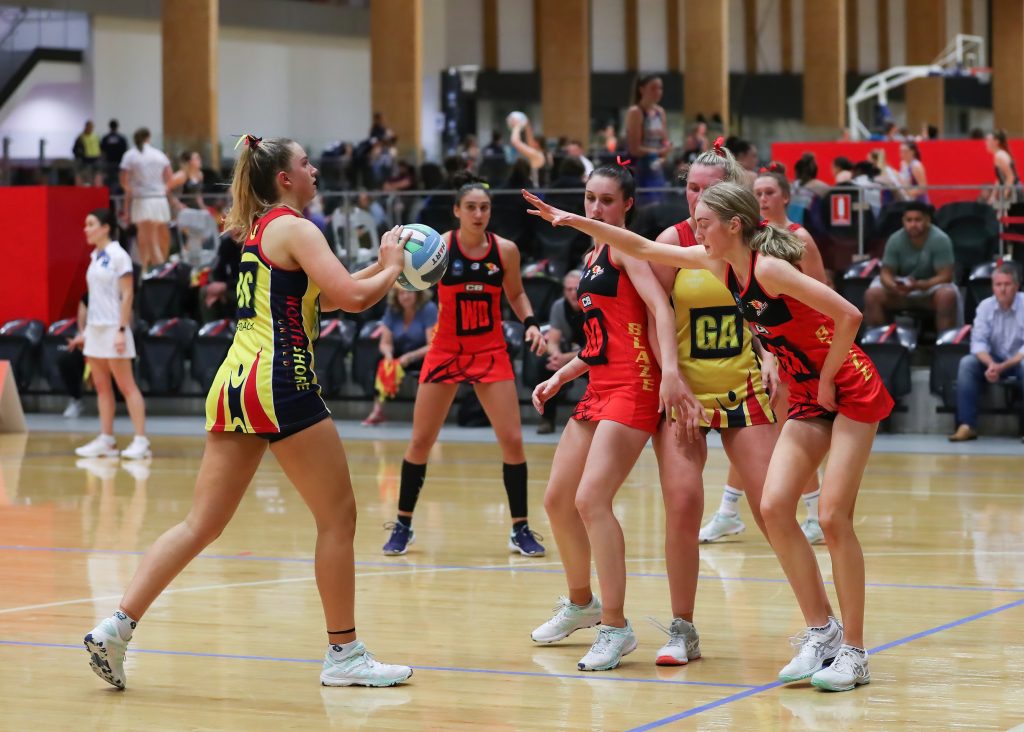 South Coast Blaze U23s had an extremely strong first quarter, taking an early lead against North Shore United thanks to its decisive defence and dynamic attack. Vice Captain and Goal Defence Jessica Bowden came out firing and had a handful of great tips and intercepts, hyping up the team. Goal Keeper Aimee Landrigan also took a couple of solid rebounds, and the team’s tight centre court defence forced some United errors and a held ball. Blaze’s well-oiled attack end, including shooters, Ky-Mani Schwenke and Vice Captain Emily Dunn, and centre court, Captain Clare McCrohon and Abbey Baker, capitalised on every turnover, with the quarter ending 19-8.

In the second quarter, the Blaze team remained the same. Blaze continued to build on the score, with a couple of United unforced errors and Blaze intercepts helping push the score out to 15 at the half, 35-20.

United fought back in the third quarter. Both teams missed goals, with possession see-sawing and fatigue setting in. Blaze Head coach Regan Tweddle took the opportunity to bring on fresh legs, with Sharnee Behr coming on at Wing Defence and Bronnee Loy subbing into Wing Attack to steady the game and Blaze extended its lead by 1 to 49-33.

By the fourth quarter it was all over for United. Blaze began with its starting 7 who continued to chip away at the score and this allowed all of Blaze’s bench to get on court with Mia Evans coming on at Goal Shooter, Kiah Yealland coming on at C, and Chloe Burden replacing Goal Keeper. The end score was 65-40. It was a decisive win by the U23s team and they are looking formidable going into next week’s Final, which will be a tough game. In the Final on Tuesday night at Netball Central, they will face UTS Randwick Sparks, who they narrowly lost to 45-48 in Round 8.