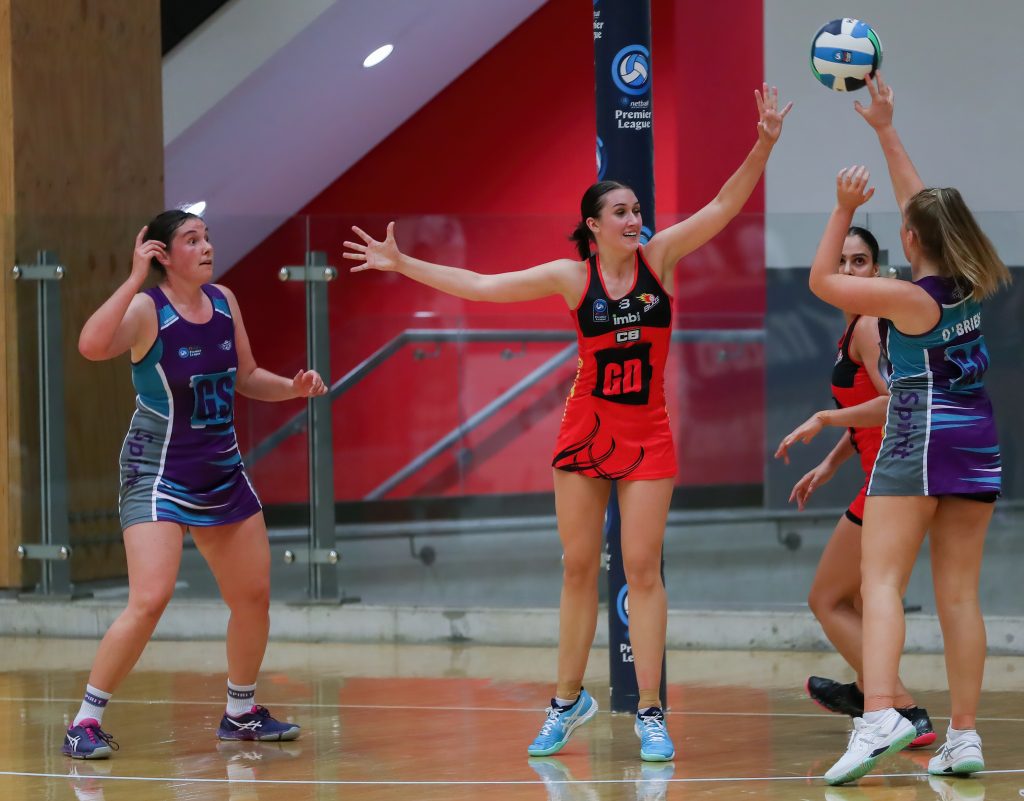 IMB South Coast Blaze U23s had a strong start against The Capital Spirit last night. Jessica Bowden blocked a pass into the circle for an early 6-4 lead. A 6 all tie saw Kiah Yealland don the Centre bib to give Bronnee Loy a rest, with full court pressure on the next defensive centre pass paying off with a held ball call and a nice shot by Emily Dunn. Blaze pushed on late in the quarter to finish the first quarter ahead, 16-9.

Annalise Chadrawy came into Goal Keeper to start the second quarter, replacing Aimee Landrigan, attacking the ball outside the circle for some early turnovers. Crisp, direct passes in the attack end saw Blaze push out the lead by 11 in the first 5 minutes. Up by 14 goals, Mackenzie Farrow made her Blaze debut at Goal Shooter, replacing the skilful Ky-Mani Schwenke, and NSW Regional Emerging Talent Squad player Mia Evans subbed in for Emily Dunn at Goal Attack bringing fresh legs and helping the team lead 35-19 at the break.

The second half saw Bronnee Loy return at Wing Attack replacing Abbey Baker, Annalise Chadrawy moved out to Goal Defence giving Jessica Bowden a rest, and Chloe Burden came on in Goal Keeper, with Head Coach Regan Tweddle getting all of her 12 named players out on court in the first game of the year. A few more subs in the quarter to bring on fresh legs showed the versatility of the team and helped Blaze notch up a 20 goal lead at 43-23 quickly. With 5 minutes to go, Mackenzie Farrow/Emily Dunn combination in the shooting circle dominated. Jess Bowden returning earlier in Goal Defence turned over ACT’s last centre pass of the quarter for a 49-29 third quarter break score.

The U23s reverted to their starting lineup for the start of the fourth quarter, albeit with a couple of positional swaps, increasing the lead out to 25 goals in just over 2 minutes to 54-29. Sharnee Behr turned it on with a beautiful centre pass intercept, and some further defensive pressure from Aimee Landrigan and Jessica Bowden in and around the Spirit’s shooting circle helped Blaze to further increase the lead. The attack ended with Ky-Mani Schwenke, Emily Dunn, Bronnee Loy and Abbey Baker worked hard to make it look easy, pushing the score to a 30 goal lead halfway through the final term, 62-32. The ever swift and accurate Emily Dunn made way for Mia Evans to return, and Blaze kept pushing out the lead, with Mia sinking a beautiful penalty shot on the final whistle for a 73-34 win in Blaze’s first game of the season. 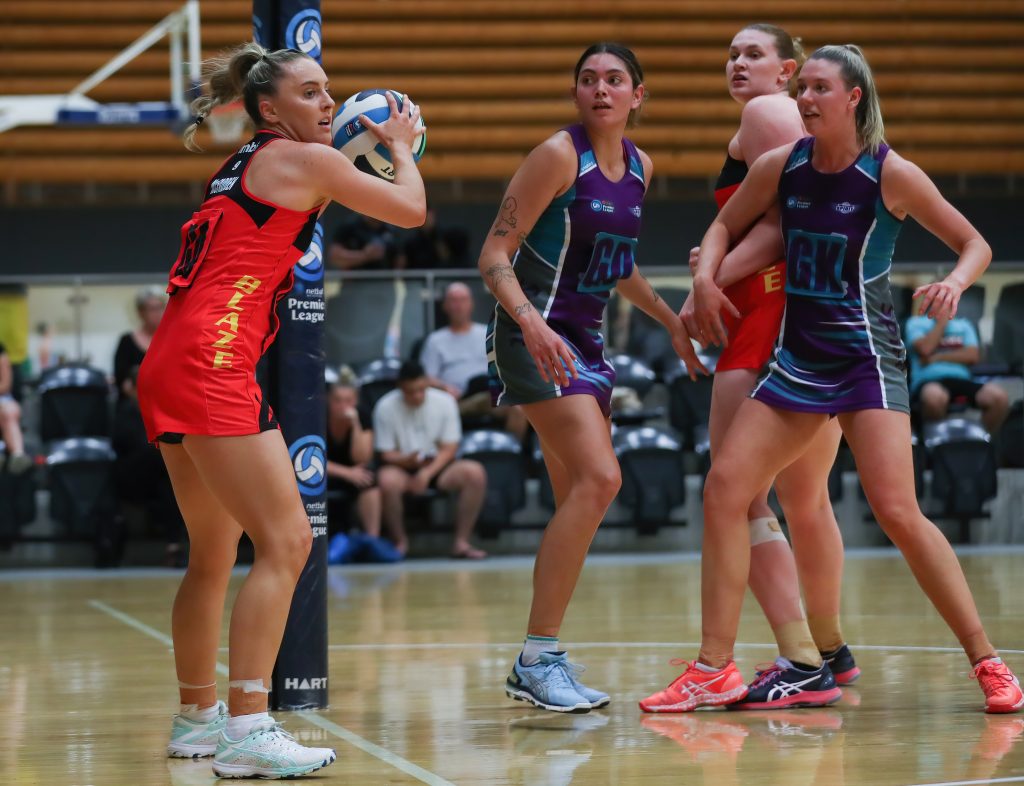 IMB South Coast Blaze Open’s team took an early lead against The Capital Spirit, 7-4, with Blaze debutant Tegan Holland making life difficult at the back with tight marking. Blaze applied full court pressure to be up 11-5 with 5 minutes to go. Consistent shooting from Abbey McFadden and Kristina Brice helped to grow the lead. Lauren Russell made her Blaze debut at Goal Defence in the closing stages of the first quarter, replacing Te-Arn Bradley and the first quarter score saw Blaze lead, 19-8.

Tegan Holland started the second quarter the way she finished the first – with a flurry! Both teams went goal for goal in the first 5 minutes, with Shelby Mallon then coming back on at Goal Attack. Peti Talanoa made her first appearance of the season at Goal Keeper with 5 minutes to go, going up against former teammate Makunde. This saw Blaze finish the quarter with the score 33-21.

Blaze reverted back to their starting 7 for the second half of the game, before Chaise Vassallo replaced Taylah Davies at Wing Attack and Taylah Davies moved into Centre. Up 40-27, former Panther Danielle Di Bartolo made her Blaze debut at Goal Attack and showed some deft touches into Kristina Brice, finishing the third quarter 47-31.

In the final quarter, Kristina Brice took a seat for Shelby Mallon to partner Danielle Di Bartolo in shooting. Te-Arn Bradley pulled down a strong rebound early, but Blaze couldn’t capitalise. Elecia Parrott continued to do a mountain of work at Wing Defence, the only player to have kept the same bib. Spirit scored 4 goals on the trot to cut the margin to 13 goals in the first 3 minutes, 47-34. It was over 3 minutes before Shelby Mallon scored the first fourth quarter goal for Blaze. Katelyn Begley returned to Centre with 6 minutes to go at 53-40. Danielle Di Bartolo was on fire from long range, scoring goal 55 for Blaze. Peti Talanoa replaced Tegan Holland at Goal Keeper with just over 4 minutes to play. Blaze played a strong defence unit game, allowing a nice pick off for Elecia Parrott. Spirit came home strong, but Blaze secured the double win with the final score 58-47.