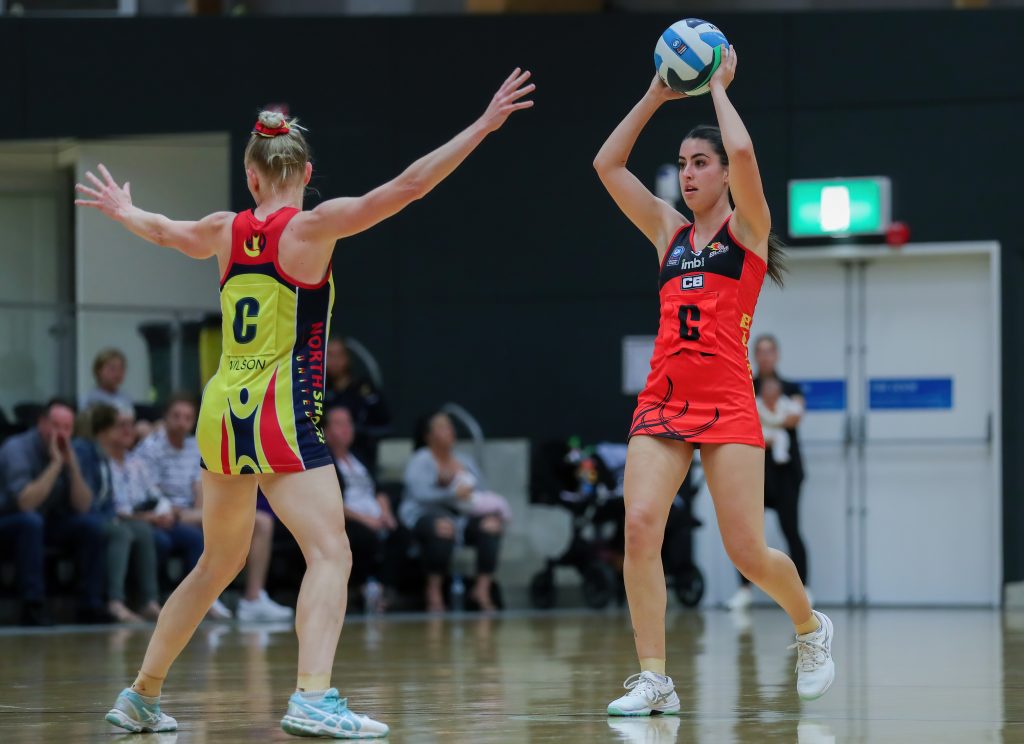 In the first quarter, both teams traded goals early in their first proper season meeting. North Shore led 4 minutes in but Te-Arn Bradley pulled in a cross ball which brought the score even. Tegan Holland also had a beautiful outside arm providing strong pressure in the circle, but the Blaze attack end struggled to find some connections, which saw North Shore lead 12-8 with 7 minutes to go. Elecia Parrott was a genuine pest on defence, and Blaze scored 2 goals with 2 minutes to go and the centre pass bring Blaze within 2. Some great pressure from the Blaze defence unit saw a 15 all tie with 1 minute to go. With time almost up, Kristina Brice had a mid-range goal rim out, and Blaze went to the break 16-16 each against the defending premiers.

The starting 7 remained on the court for the beginning of the second quarter. Blaze converted a North Shore centre pass to begin but were not able to convert their own centre pass. Blaze were quickly down by 5 in the first 6 minutes, 23-18. North Shore United scraped well to take a 26-18 lead, before Lauren Russell replaced Elecia Parrott at Wing Defence with 7 minutes remaining. Their flow down to court was sweet, with Blaze looking more stable, and another turnover to North Shore gave them an 11 goal lead, at 30-19, with 4 minutes remaining. A break to wipe the floor at 3 minutes was enough for a recharged Tegan Holland to take an intercept out of the circle, and Blaze attackers rewarded her efforts. With 20 seconds to go, Tegan Holland is at it again, but the our attack couldn’t convert, with the score 34-24 at half time.

The start of the third quarter saw Head Coach Marji Parr revert to her starting 7, with Elecia Parrott back at Wing Defence. North Shore scored the first 4 goals before a pinpoint feed from Abbey McFadden to Kristina Brice streamed the flow for 38-25. Chaise Vassallo came on at Centre and Katelyn Begley went to the bench with 6 minutes to go and a score of 44-32. Blaze fought back to go down by 2 in the quarter, 49-37 at the break.

Chaise Vassallo remained in Centre, with the rest of the original starting 7 for the commencement of the fourth quarter. Blaze made a move in the quarter, winning it by 7, but it just wasn’t enough to make up for the second quarter fade out. The final score saw Blaze down by 5 goals, 60-55.

North Shore started off quickly, up 6-0 before Blaze registered a goal. Solid defensive pressure in the circle and on shots made life difficult as North Shore led 8-3 with 7 minutes to go. Kiah Yealland came on in Wing Attack for Abbey Baker, but another missed shot from Blaze’s normally accurate shooters allowed North Shore to maintain their lead. North Shore errors kept Blaze in the game, and a Kiah Yealland pass deflect and hustle saw Blaze draw closer, 9-7. Abbey Baker took the Centre bib from Bronnee Loy, and Blaze finished strongly, but down 11-9.

Head Coach Regan Tweddle sent out the same 7 that finished the first quarter, and in commentary we were fortunate enough to have Paige Hadley. An offside by Kiah Yealland was saved by a well-timed intercept by Sharnee Behr, but an umpire replay call sent the ball back to North Shore again. Bronnee Loy came on in Wing Attack, but a rolling substitution infringement saw Blaze lose the centre pass to a penalty and an automatic caution for delaying play. Great defensive work made up for the error, and Blaze converted the next 2 goals to be within 1 goal of North Shore. Aimee Landrigan came on for captain Jessica Bowden at Goal Defence, followed by Kiah Yealland subbing on for Abbey Baker at Centre, and Jessica Bowden on at Wing Defence for Sharnee Behr. Kiah Yealland worked hard to create a loss ball opportunity for Blaze, with 20 seconds to go Annalise Chadrawy got another intercept, but Blaze just couldn’t finish it. Half time saw Blaze down by 2 goals, 22-18.

Sharnee Behr replaced Aimee Landrigan at Goal Defence, Mia Evans replaced Ky-Mani Schwenke at Goal Shooter, and Emily Dunn came back on Goal Attack. Halfway through the quarter, North Shore led 30-21. Abbey Baker replaced Kiah Yealland at Centre, but North Shore continued to roll on. Aimee Landrigan replaced Annalise Chadrawy, and her long reach caused a missed goal and turnover ball. Blaze eventually converted through their moving circle, 32-22. Kiah Yealland emerged at Wing Defence, showing her versatility across the midcourt, but the accuracy of the Blaze attacking end both in ball placement and shooting let them down. North Shore ended up 35-24 at three quarter time.

Ky-Mani Schwenke returned to anchor Blaze at Goal Shooter and nailed her first goal. Blaze gained possession in the defensive circle and the attack end made the most of the ball to cut the margin to 8 goals. Blaze showed their readiness to chip away at the gap. Ky-Mani Schwenke went unsighted in the circle, but Blaze managed to feed the ball for 36-28. North Shore pulled away again and pushed out to a 47-32 lead with 5 minutes remaining. Defensive pressure from North Shore throughout the match made life difficult for the Blaze attack. Chloe Burden gained court time at Goal Keeper for the last few minutes, with Sharnee Behr at Goal Defence, and came up with a late rebound. With 40 seconds to go, Kiah Yealland picked off a North Shore centre pass bound for their Wing Attack and Ky-Mani Schwenke rewarded the possession. Blaze goes down 51-37, with the championship third quarter being an area for Blaze to work on.