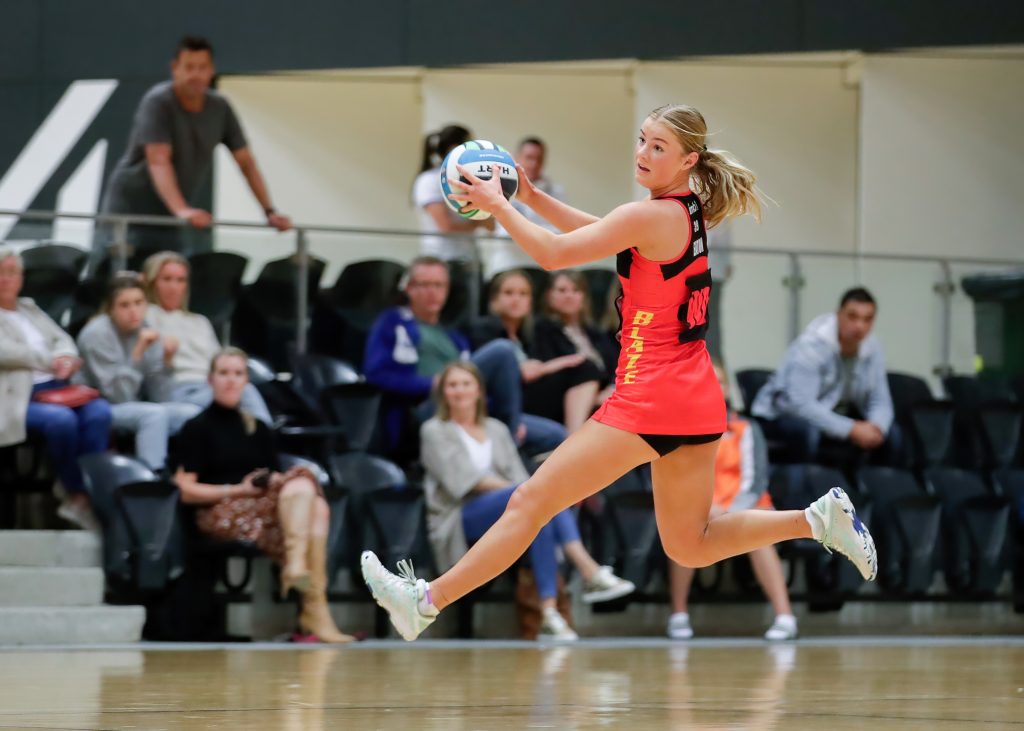 Last night IMB South Coast Blaze U23s were ready for a fast game against ERNA Hawks. Illawarra young gun Gabby Eaton made her Premier League debut at Wing Defence having an impact right at the start, creating a turnover in the first 30 seconds. Blaze scored the first 2 goals, taking the lead 6 minutes in 5-2. Aimee Landrigan pulled a strong rebound, but Blaze let the Hawks back in to lead by 2, with the score 7-5 with 5 minutes remaining. A great hold from Ky-Mani Schwenke was seen and delivered by Emily Dunn. The Hawks snuck into the lead in the closing stages, with a score of 12-11 at the end of the first quarter.

Mia Evans started the second quarter in Goal Attack, teaming up with Ky-Mani Schwenke. A rocket circle edge feed from Kiah Yealland to Ky-Mani Schwenke evened the score early, but passing errors let the Blaze down. Gabby Eaton was on fire with her handling and forced a baseline turnover for Blaze, which Mia Evans was unable to convert. Ky-Mani Schwenke helped out with the next two goals, which saw Blaze up 16-14. Halfway through the quarter, Bronnee Loy’s first appearance for the game saw her replace Kiah Yealland at Centre, who was having a physical running battle with the Hawks Centre. Mia Evans nailed a lovely goal from the 2 point line for a 19-16 lead. Blaze made a move in the last 4 minutes, leading 22-16. Ky-Mani Schwenke pulled in the last highball and dropped the goal for a 24-18 half time lead.

It was goal for goal early in the third quarter, but Blaze started pulling away. Sharnee Behr came on for Jessica Bowden in Goal Defence. Blaze led 30-22 five minutes into the quarter. Quick work from the attack end saw Blaze hit a 10 goal lead for the first time. Gabby Eaton used an outside arm but could not quite reel it in. Abbey Baker worked hard on a give and go, with Blaze 34-23. With 2 minutes left, Emily Dunn came on in Wing Attack for Abbey Baker and Mackenzie Farrow as Goal Shooter for Ky-Mani Schwenke. Emily Dunn with a beautiful circle edge feed to Mackenzie Farrow was the last goal of the quarter, with thanks to a flying disruption from Aimee Landrigan m. Blaze pulled ahead going into the fourth quarter 40-28.

Blaze pressed on in the fourth quarter, pushing out to 18 goals. Chloe Burden came on in Goal Keeper for Aimee Landrigan and Kiah Yelland came back in Centre for Bronnee Loy. With just under 5 minutes remaining, Blaze led 52 to 31, with good service to Mackenzie Farrow. Chloe Burden read a bounce pass to the shooters well but unfortunately gave it straight back. Kiah Yealland and the Hawks Centre, continued to ride each other and unfortunately Kiah Yealland got the offensive contact – Hawks back to 18 goals. Sharnee Behr with a great 3-feet secured a turnover, and her Illawarra junior teammate Mia Evans nailed her longest shot of the night. Blaze held up Hawks long enough to stop one last goal and came away with a 19 goal win, 54-35.

The commentator’s MVP went to Gabby Eaton, who had a great debut match with a full game at Wing Defence.

The IMB South Coast Blaze Opens team started the game strongly with the first 3 goals from Kristina Brice before the Hawks got on the board. A beautiful feed from Taylah Davies in the pocket to Kristina Brice saw a 6-3 lead 5 minutes in. Blaze peppered the ball in with ease to Kristina Brice, and the score pace picked up – 10-4 with 8 minutes remaining. Pressure from Blaze saw them pick up a held ball, and the flow continued. Hawks made changes but just couldn’t slow down the Blaze. At the end of the first quarter, Blaze were up 25-10.

The second quarter saw the Hawks come out with a bit more fight, going goal for goal with Blaze, their changes working to halt the Blaze, 32-16 with 8 minutes remaining. Patient feeds from Blaze saw them kick out to a 20 goal lead, cemented with another beautiful goal from Kristina Brice. With just under 5 minutes left, Parrot and Holland quickly put in work to secure the ball from the Hawks, but pressure and a held ball stopped their flow. Blaze got back to work with a quick feed and goal from Kristina Brice, with Blaze up 37-19. Taylah Davies made a huge pass to Abbey Mcfadden, but strong defence halted the ball. With just over 3 minutes to go Blaze sped up their passing game. Katelyn Begley delivered a high pass to Taylah Davies and a beautiful pop from Abbey McFadden got the ball to Kristina Brice, who nailed the goal, 39-22. Lauren Russell came on at Wing Defence for Elecia Parrott. Hawks made it difficult inside the goal circle, but Abbey McFadden broke through and delivered the 40th goal for Blaze. With less than 1 minute left, a signature ball from Mcfadden to Brice saw Blaze sink another goal, with the score 42-25 at halftime.

Two minutes into the third quarter, the Blaze attackers continue to send the ball down to Kristina Brice with ease, bringing the score to 45-27. Lauren Russell turned over a pass from the centre and Abbey McFadden’s expert feed to Kristina Brice continued to make things difficult for Hawks, taking the score to 46-28. With less than 6 minutes left, quick feeding from the attack to Kristina Brice saw Blaze secure more goals, 50-38. Tegan Holland with long arms pulled the ball in from Hawks and sent it straight down the court to the attackers, with Brice landing a mid range goal, 52-41. A great tip from Elecia Parrott gets the ball to Tegan Holland and straight back down to the attack end, but a small fumble stops blaze from converting, finishing the third quarter 52-44.

A few minutes into the fourth quarter saw Blaze lead 53-46. Chaise Vassallo at Wing Attack fired a pass to Kristina Brice but couldn’t keep a handle on it. Hawks used a straight line play to bring the score within 6 goals. Taylah Davies came back on at Wing Attack with Blaze’s lead dwindled down to just 2 goals. Abbey McFadden with a skilful flick feed into Kristina Brice saw Blaze lead 58-54 with just under 7 minutes remaining. Kristina Brice was shooting under great Hawks pressure. Hawks levelled the scores to 60 each with less than 2 minutes to go. Katelyn Begley delivered a safe feed to Kristina Brice for a 2 goal buffer with 30 seconds to go before Kristina Brice sealed the game for Blaze. The final score saw Blaze secure the double win over ERNA Hawks, with the final Opens score 63-61.