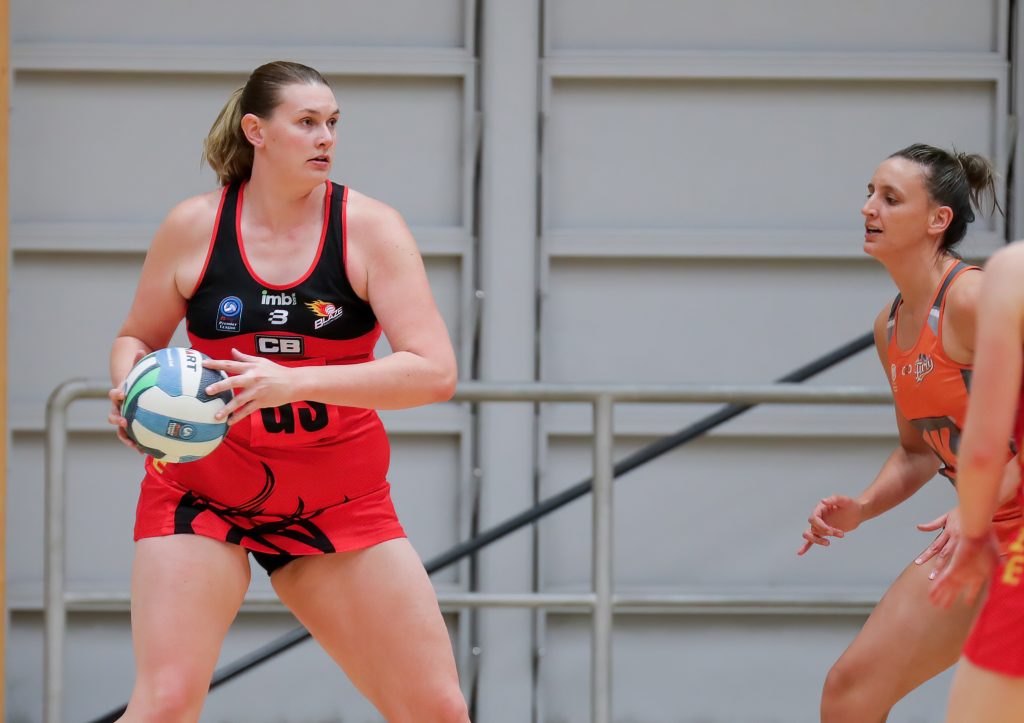 The last time our IMB South Coast Blaze Opens team faced GWS Fury was in the playoffs, were Blaze came out triumphant taking the win and 7th place. Unfortunately this time the game was a tale of two halves which saw our Opens come storming home, but it was just not enough to snatch the win.

GWS Fury broke the Blaze centre pass for a 3-2 lead, before Tegan Holland at Goal Keeper pulled in a ball. A poor start, a few missed goals and some turnovers, saw Blaze quickly down 10-2, after the first 6 minutes. Coach Parr got the rolling subs early and reverted back to her previous starting defensive line with Te-Arn Bradley and Elecia Parrott on at Goal Defence and Wing Defence respectively. Danielle Di Bartolo rewarded Blaze with a mid range goal, 5 seconds after coming on at Goal Shooter, with just over 4 minutes remaining Blaze were down 15-8. A Katelyn Begley hustle paid off with an intercept, nicely finished off by Danielle Di Bartolo – down 19-9. Fury dominated the first quarter, going to the break up at 22-10.

The second quarter started with Blaze on the back foot, and Fury aimed to increase their lead. The Blaze lineup was the same, until Kristina Brice came on at Goal Shooter halfway through the quarter. Fury went to the halftime break with an 18 goal lead, 42-24.

“Go back to basics”, captain Katelyn Begley said, the key message at half time after a flustered first half. In the third quarter, the Blaze roared back to life, and reeled off a superb run to take the quarter by a massive 17 goals. Setting themselves up for a fourth quarter run at the Fury, Blaze forced the Fury into several changes in the quarter.

Blaze took the lead early in the fourth quarter, going goal for goal with Fury. However a couple of errors late in the game cost Blaze the win, going down 61-57.

Our IMB South Coast Blaze U23s only faced GWS Fury once last year so this was their second ever match-up.

Fury fought early for a 4-1 lead in the first 5 minutes. Ky-Mani Schwenke in Goal Shooter missed some early attempts, but Abbey Baker n Centre intercepted to help Blaze score their second goal. Mia Evans came on at Goal Attack for Emily Dunn halfway through the first quarter, with Fury up 7-3. Emily Dunn put the Wing Attack bib on and came back on with 5 minutes remaining. The quarter ended with a Fury 13-8 lead.

Blaze remained unchanged, coming back on for the second quarter. Great ball speed from the Blaze saw them draw within 2 goals, with the centre pass to come. A run of 5 goals was halted as Fury took over to score their first goal of the quarter 3 minutes in with the score levelled at 13-13. Rolling subs saw Sharnee Behr on at Wing Defence and Annalise Chadrawy on at Goal Keeper for Gabby Eaton and Aimee Landrigan respectively. Blaze went ahead with a 6 goal lead, 28-22, after they successfully secured 11 goals in the second quarter.

In the third quarter, Blaze put on a lead at 32-24, but Fury wouldn’t let them get far. Two offside calls in a row halted momentum for Blaze but Annalise Chadrawy’s loose ball pickup helped Blaze to maintain a 10 goal lead. Ky-Mani Schwenke scored on the hooter, which saw Blaze’s lead continue with a further 7 goals, finishing the quarter 45-32.

Chloe Burden came onto the court at Goal Keeper and Mackenzie Farrow on at Goal Shooter, providing fresh legs. A nice read saw Chloe Burden snatch an intercept with less than 2 minutes left. Blaze took the win at 58-49, to beat a previously undefeated GWS Fury.