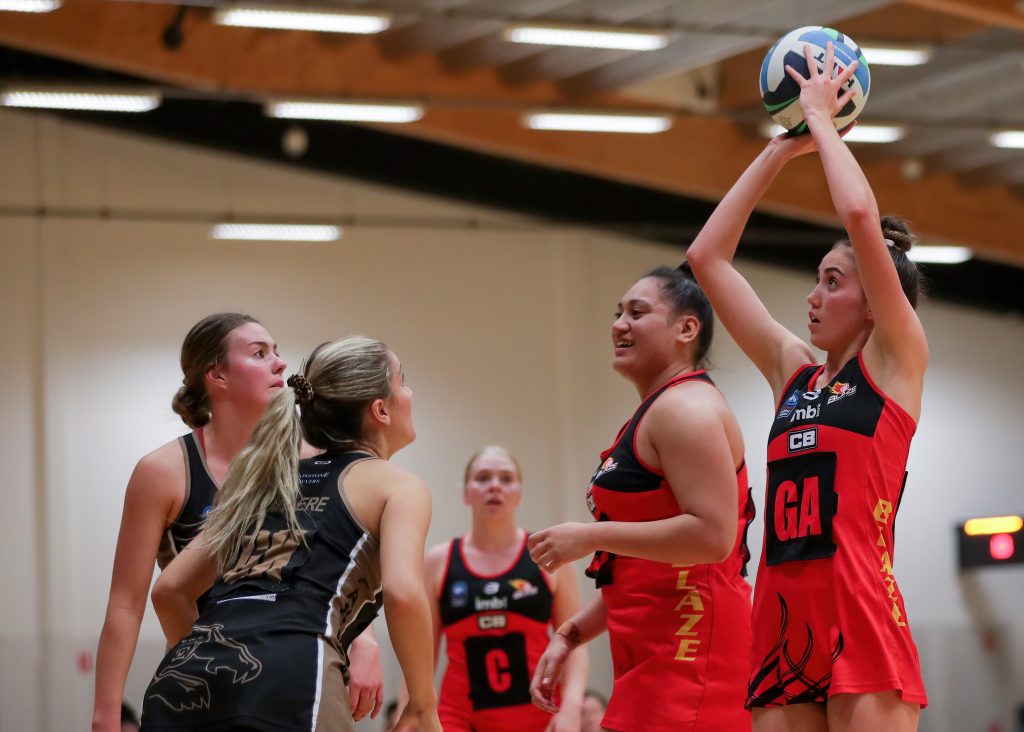 Panthers began the game with the centre pass, and came out 2-0 early. B laze settled into a rhythm  and went goal for goal until a Bowden block (10:10 remain 1st Q) gave them an advantage. The middle part of the quarter belonged to Panthers, getting out to 14-8. Landrigan replaced Bowden at GD with a couple of minutes to go, and Panthers went to the first break with an 18-11 lead.

Blaze came out with more purpose in the second quarter, reducing the lead in the first 4 minutes through great defensive pressure from Bowden and Landrigan, and a tip from Baker. Bowden came on at WD for Behr, and with 5 minutes to go, Dunn took the WA bib from Loy as Panthers maintained a 3 goal lead. Hyde, the GS for Panthers proving a solid option under the post for the opposition. Blaze won the quarter by 4 goals but went into half time down 31-28 on the scoreboard.

Annalise Chadrawy and Behr formed the new defensive circle combination for Blaze to start the second half, replacing Bowden and Landrigan. Panthers again pushed out their lead to 6 early on before Blaze fought back, a Chadrawy rebound helping Blaze to 33-36. Burden came back on at GK for Chadrawy after a few minutes to analyse the game on the sideline, and Farrow replaced -Schwenke at GS for some fresh legs. Burden’s long reach came in handy for a tip and intercept (7mins remain, 3rd Q), and Blaze were within 2 goals. Blaze drew level at 38 a piece with just over 5 minutes remaining. Schwenke came back on at GS with 3 minutes to go, and 3 goals down. Schwenke with circle edge intercept and convert with 30 seconds to go draw Blaze back even at 41-41 all, before Panthers scored right on three quarter time to take a 1 goal lead.

The fourth quarter started with a change at C, Loy replacing Baker. Accurate shooting from Evans keeping Blaze even, while Burden moved her feet well around Hyde to get a possession gain (9:30 remain in 4th). Blaze went into the final three minutes with a 3 goal lead. While Panthers fought hard, Blaze held on for a 1 goal win – 55-54.

Panthers got the first goal off their centre pass, and also picked up an early turnover before Parrott showed great speed to pinch a challenging intercept and Blaze evened the scores. Russell with an early rebound in GK and Blaze treasured possession before a double play from McFadden and Vassallo converted to take an early break (11:55 remain in 1st Q). Beautiful hands over the shot from Bradley saw her pick up the rebound – rewarded for her efforts by Brice in the shooting circle, and a 5-2 lead. Panthers fought back to retake the lead 6-5. Russell disrupted play for a turnover. Quarter time, and it was 15-15.

Down by 5 early in the second, Davies replaced Vassallo at WA. At 23-19, Talanoa replaced Russell at GK. A pick up from Bradley brought Blaze back to within 1 goal. A sideline play from Davies and McFadden finds Brice under the post (2:30mins remain 2nd Q). Talanoa with a touch and a rebound gives Blaze the opportunity to close the gap, but Blaze lose position with a sideline infringement. Mallon subs on for McFadden at GA late in the quarter, before Blaze go into half time down 33-28.

Panthers crept out further early in the third quarter, leading 39-30 early, before a nice read and tip from Talanoa helped stem the flow. Mallon found her range straight after and nailed a long bomb, before a quick play ended up with her under the post to score again. Russell replaced Parrott at WD mid way through the quarter, and a lovely defensive play from Talanoa and Bradley brought Blaze to within 5 with 30 seconds remaining. Panthers went to the final break down by 5, 50-45.

The fourth quarter saw Blaze struggle to stay in the fight. Coach Marji Parr rang the changes to try and slow the flow, but it wasn’t enough – the final score 52 – 68.