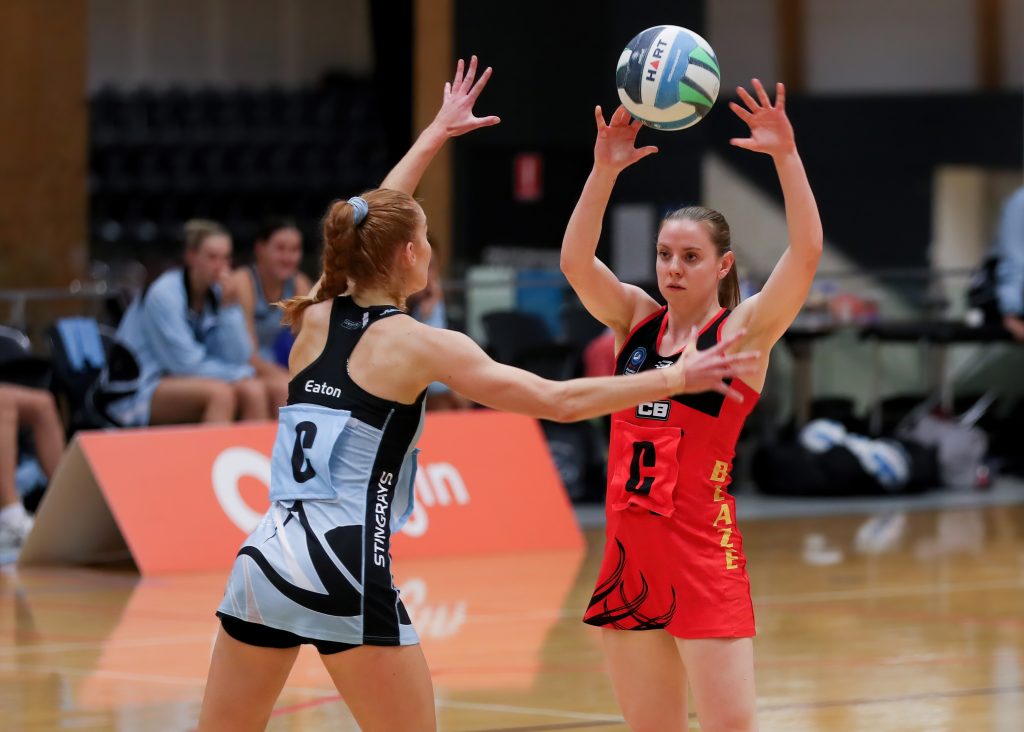 Blaze started the game with the centre pass, but lost it quickly with a breaking call against new Blaze recruit Johnson. The team quickly pulled back the Stingrays centre, and drew even at 1-1, before the ball went back and forth for a few minutes before anyone scored again. Some poor shooting from Stingrays saw Blaze jump out to a 5-2 lead in the first 5 minutes. Parrott replaced Johnson early, as the former Silver Fern and new Mum returns to the court from injury. Parrott came through for a flying intercept  (9mins to go, 1st Q) and the shooters converted for 7-2. A 3 pass centre pass with a high ball into Brice gives Blaze 10-3 (7 mins to go). Blaze continued to build momentum, going into the first break 17-6.

Stingrays made some changes starting the second quarter, but Bradley with a early tip gave Blaze the break. An incorrect throw in cost an opportunity for Blaze, but they continue to push out to a 14 goal lead half way through the quarter – 26-12. Vassallo replaced Davies at WA, and the Blaze front line continued to tick along nicely. With 4 minutes to go, Davies replaced Begley at C – going head to head with fellow Illawarra junior Eaton, the Stingrays C. Brice scored off a quick transition to take the lead to 20 goals with less than 2 minutes remaining. Blaze took that lead into the half time break, 36-16.

Viewers on the live stream were treated to a wonderful interview with Blaze Club Captain Taylah Davies as part of the half time program.

The second half started with Mallon taking the GA bib, and Begley back on at C. Stingrays came out hungry in the first 6 minutes, outscoring the Blaze by 5 goals to be down 40-25. Coach Parr made some defensive changes, with Johnson back on at WD for another spell, and Russell on at GD to partner Holland in the circle. Brice nailed a beautiful long shot from the 2 point arc, Blaze to 43-26 with just over 6 minutes to play in the third quarter. Begley and Johnson working hard around the circle edge helping to keep the pressure on the Stingrays for turnover ball. It was Johnson’s first game of Netball in over 18 months, having being out with injury before giving birth to her daughter in 2020, and working hard to come back from an injury in pre-season – it was easy to see once the timing is back, she will be a headache for opposition. McFadden returned at GA with 5 minutes to go, and Parrott at WD for the last minute, as Stingrays mounted a mini-comeback. Stingrays won the quarter by 8 goals, with Blaze leading by 12 goals going into the final quarter – 45-33.

Blaze returned to their tried and tested starting line-up for the start of the fourth quarter, as the Stingrays young shooting combination step up to help the get to within 8 goals. A good rebound shut out from Bradley gives Blaze the turnover, but a misplaced pass lets Blaze down. Brice continued to reward her attackers with their aerial passes by pulling in ball after ball and making them count. Davies continues to pass and cut with ease, leaving her defender trailing. Blaze working hard on defence, racking up the tips, finally get a turnover through a missed shot – led 53-45 with less than 5 minutes remaining. A take under pressure by Brice (4:15 remain in 4th Q) pushed the lead back to 9. A magic piece of play starting with a running Holland tip just came un-done with an uncontrolled pass to Brice (3:10 remain) – the passage of play showing how much Blaze want to win by backing each other up repeatedly. Stingrays came with 5 goals with a minute to play, but Davies picked up a loose ball for Blaze to secure the win. Brice iced a great shooting performance with another nothing-but-net long shot to take the win 56-60.

Stingrays stole the lead early, after Blaze started with the centre pass advantage, before Blaze got a turnover on the next centre to get things back on track. The first 4 minutes was described by guest commentator, Swifts co-captain Maddy Proud, as ‘netball tennis’, going back and forth. Both teams making unforced errors, with balls being peppered in all directions. Great hands over the shot and lean from Bowden get the missed shot turnover to Blaze. Dunn replaces Loy at WA half way though the quarter, with Blaze trying to find the connections on attack. Blaze force an error with 5 minutes to go, levelling up the low scoring first quarter 7 a piece. With just over 3 minutes to go, Burden replaced Landrigan at GK. The defence change helps Bowden pick off an intercept, and Blaze keep pace with Stingrays. Stingrays go to the first break leading Blaze 12-10.

Blaze make a change for the second quarter with Loy replacing Baker at C. Evans with some smooth work in the circle (13:10 to go in 2Q), Blaze down by 3 goals 12-15. Stingrays quickly push out to a 6 goal load with some smooth circle work and shooting. A. Chadrawy replaces Bowden at GD for some fresh legs on the dominate Stingrays GA. At 24-15 down and just over 6 minutes to go Blaze make a double change with Baker on at C and Bowden on at WD. Stingrays keep driving hard for a 10 goal lead before the main break, but Blaze keep it to single figures – 28-20.

Blaze hand Kate Meurant her first game of the season at GA to start the third quarter. Stingrays came back from the break ready for more dominance. Meurant worked hard for her first attempt at goal but wasn’t successful. 5 minutes in and down by 13 goals, Behr replaced A. Chadrawy at GD, Evans on at GS for Schwenke, and Loy on at WA for Dunn. Stingrays out to 15, 38-23, with 50/50 balls falling their way. Dunn replaces Meurant at GA for a moving circle combination with Evans. A nice front position from Burden gets the reward for Blaze. A caution to Bowden for persistent infringing, before more rolling subs see Landrigan on at GD and Behr showing her versatility in C.

Blaze come back out with the same line-up as it finished the third quarter with, but to little advantage. A great passage of play sees Evans finish it off, Blaze down 47-29. Farrow took the GS bib from Evans moving out to GA, with Blaze down by 18 goals. Halfway through the quarter and Baker and A. Chadrawy return at C and GK respectively. Blaze work it back to a 14 goal deficit, 51-37. A. Chadrawy working hard till the very end, attacking every ball. Blaze go down 52-38.