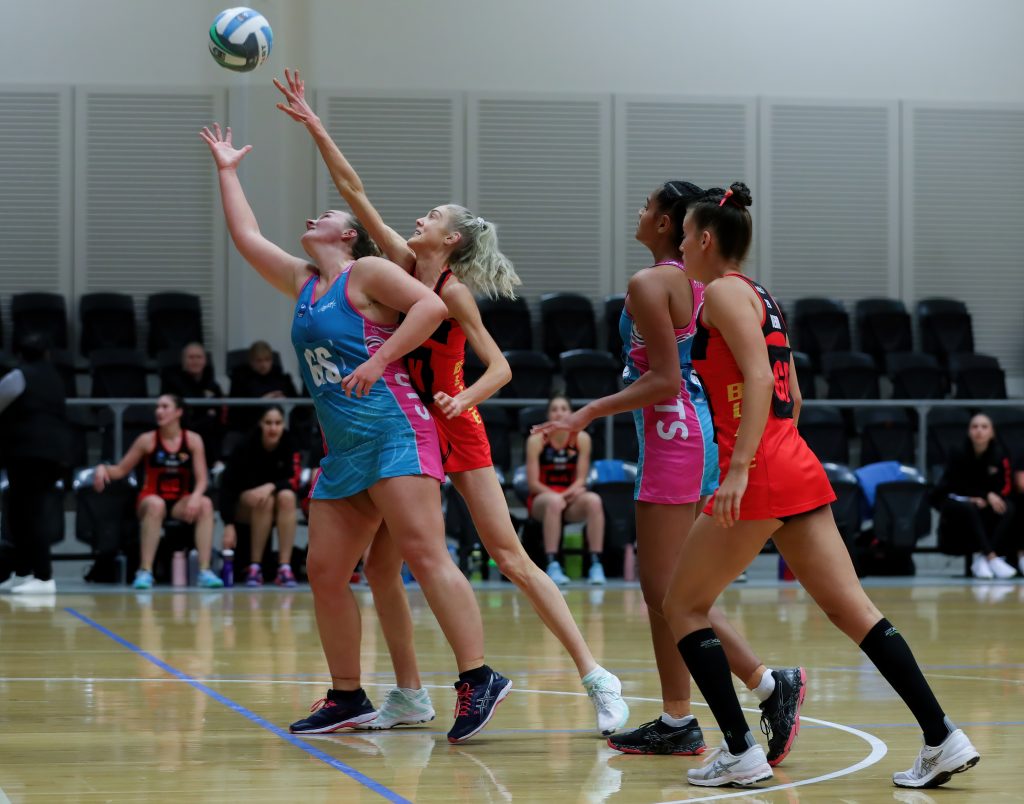 Blaze got out to a great start leading 8-1 after just 5 minutes. S. Chadrawy made her first appearance of 2021, and she was wreaking havoc early. It took Sparks over half the quarter before they registered their second goal. The connections for Blaze clicked early, leading 13-5 with just over 4 minutes remaining. After some Sparks changes, Blaze went to the first quarter break up 15-10.

Sparks made a push early in the second quarter, coming within 2 goals – 18-16. The versatile Behr came on a GK for A. Chadrawy, and got an early forced turnover as the ball sailed over the baseline. Schwenke gave away a contact penalty under the post, dashing the reward for effort and a 4 goal lead. With 6 minutes to go, the lead remained around a 2 goal margain. With 1 minute to go, Landrigan took the GK bib from Behr.

In the third quarter the reigning champions the Sparks too the lead early, maintaining their new lead with a 2 goal buffer 37-35 with 7 minutes to go. Behr was a replacement for Bowden at GD, with the rest of Blaze remaining the same. Blaze Training Partner Fenner made her debut at GK late in the third quarter, replacing Landrigan. Sparks quickly increase their lead to take the third quarter by ? goals, 48-39.

Coach Tweddle made changes for the fourth quarter with Evans entering the game, Dunn moving to a creative feeding role at WA, Loy into C and Baker on the bench in attack. On defence, Bowden came on at WD, Behr remained in GD, and A. Chadrawy returned to her starting positions at GK. The Blaze changes paid off, only trailing by 5 goals half way through the final quarter. The Blaze were working hard to turn the ball over, but a 4 goal deficit with 2 minutes to go seemed too much. Behr got a vital turnover with 75 seconds left, but Blaze couldn’t maintain possession on their own centre pass. Sparks remain undefeated with a 59-56 win over Blaze.

Sparks had the centre pass to start, with both teams going goal for goal early. With 8:30 minutes remaining, and Vassallo rolled on for Davies, before Sparks got a mini break. At 6-9 down McFadden tried to thread a fine needle to a double-teamed Brice, but it didn’t pay off. At 12-6 down, McFadden worked hard to make amends on defence, getting a hard-earned turnover. With 2:30mins left, Davies came back on at WA. Crisp passing on attack saw Sparks scoring easily, leading 19-10 at the first change.

Johnson on for Parrott at WD, but Blaze struggling on attack, with 6 minutes to go Mallon came on at GA for McFadden. The well-drilled Sparks double the Blaze score at 30-15. A beautiful passage of quick play saw Blaze down 32-18 with 4 minutes to go. A well-earned rebound from Holland, and some solid play on attack see Blaze grab a couple back in the last few minutes, going into half time down by 11 goals, 34-23.

Sparks again with the centre pass to start the second half as Parrott on at WD was the only change made. Mallon showed a great connection with pin point feeds to Brice. Blaze got to within 7 goals, 38-31, before Johnson returned to the court with 6:30 minutes remaining. McFadden replaced Mallon at GA with 5 minutes to go. Sparks returned to deficit to 10 goals before Talanoa replaced Holland at GK, 42-32. Holland quickly put the GD bib on, with the new defensive combination of Talanoa and Holland for the last 2 minutes. Blaze managed to hold out the SDparks in the last 15 seconds, but the score was back out to 13 goals, 46-33.

Vassallo started the fourth quarter in C, replacing Begley, and Parrott on at WD for Johnson. Shot just dropping regularly throughout the match cost the Blaze gaining momentum. 6 minutes in, Sparks hit a 15 goal margin for the second time, the highest in the match so far, for 52-37. Despite further changes, Blaze couldn’t stop the margin from creeping out, with the final score 61-43 to Sparks.