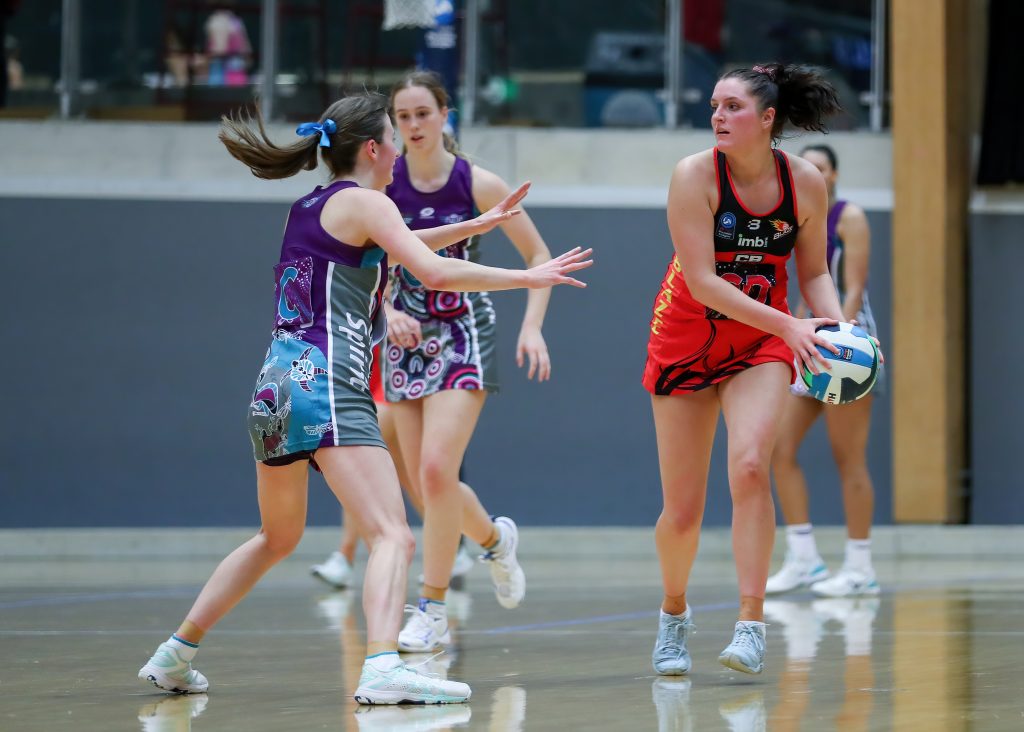 IMB South Coast Blaze Opens had a convincing win over The Capital Spirit in the only Saturday game of the season.

Blaze got out to an early 9-3 lead due in part to a number of errors by Spirit.  Spirit quickly settled brought the score back to 13-9.  Taylah Davies took an impressive intercept in the centre court, with Kristina Brice converting, followed quickly by a second long-bomb goal, taking the score to 15-11.  Te-Arn Bradley was cleaning up every loose ball in defence.  A late goal to the Spirit saw the quarter time score at 18-15.

Danielle Di Bartolo (GA) and Peti Talanoa (GK) both entered the game after the break, with Tegan Holland taking the GD bib from Bradley.  Talanoa and Holland’s rebounds and intercepts, together with Chaise Vassallo’s formidable centre court work saw the score out to 24-19 midway through the quarter, however the Spirit refused to let Blaze pull away.  Taylah Davies was contesting everything, with Chelsea Bolton taking the WA position with three minutes remaining.  Spirit scored a goal on half time to make it 34-28.

The starting defensive duo of Bradley and Holland returned to the court after the break.  Di Bartolo had her eye in early, with the centre court combination of Vassallo and Davies bringing the ball down the court with speed.  Abbey McFadden was injected into the game as GA and continued the accurate shooting.  Elecia Parrott was solid in WD, contesting every ball and coming up with crucial intercepts.  Third quarter score, 48-39.

Blaze came out firing in the fourth quarter, with three consecutive goals seeing the score quickly blow out to 51-39.  Shelby Mallon took over from Brice as GS and Talanoa returned as GK.  The Spirit mounted a “spirited” comeback, but Blaze were ultimately too strong, taking home the win 65 – 55.

IMB South Coast Blaze U23s came away with a solid win against The Capital Spirit.

Blaze started off slowly, trailing 3-5 early in the first quarter.  Bronnee Loy was brought into the game in WA, following which the Blaze put their foot down and pulled out to 12-8.  The first quarter saw great connections between the attacking players, with a goal on the buzzer to Mia Evans making the score 14-9 heading into the first break.

The second quarter began with Kiah Yealland in Centre and the team on a mission.  Defensive turnovers and lightning speed down court into the circle saw the score creep out to 20-12.  Selene Chadrawy returned to the Centre position.  Aimee Landrigan and Annalise Chadrawy were pulling in intercepts in the defence end, with shooter-to-shooter passes between Ky-Mani Schwenke and Mia Evans making it difficult for the Spirit to stop the flow of Blaze goals.  Mackenzie Farrow entered the game as GS and a couple of late goals saw the half time score at 30-17.

Chloe Burden (GK) and Kiah Yelland (WD) entered the game and Kiah had an immediate effect, intercepting the first centre pass.  Farrow rewarded her with a goal to take the margin to 14.  Dunn entered the game as GA and combined well with Farrow, extending the lead out to 19 goals.  Abbey Baker came on as Centre.  Yealland again came through with a flying intercept of a Spirit centre pass.  Dunn converted, making the three quarter score 46-23.

The same team continued into the fourth quarter.  The defensive combination of Chloe Burden and Jessica Bowden was wreaking havoc on the Spirit shooters.  The Spirit did their best to win back a few goals with some impressive shooting, but Blaze had it all their own way in the last quarter, the final score 57 – 33.