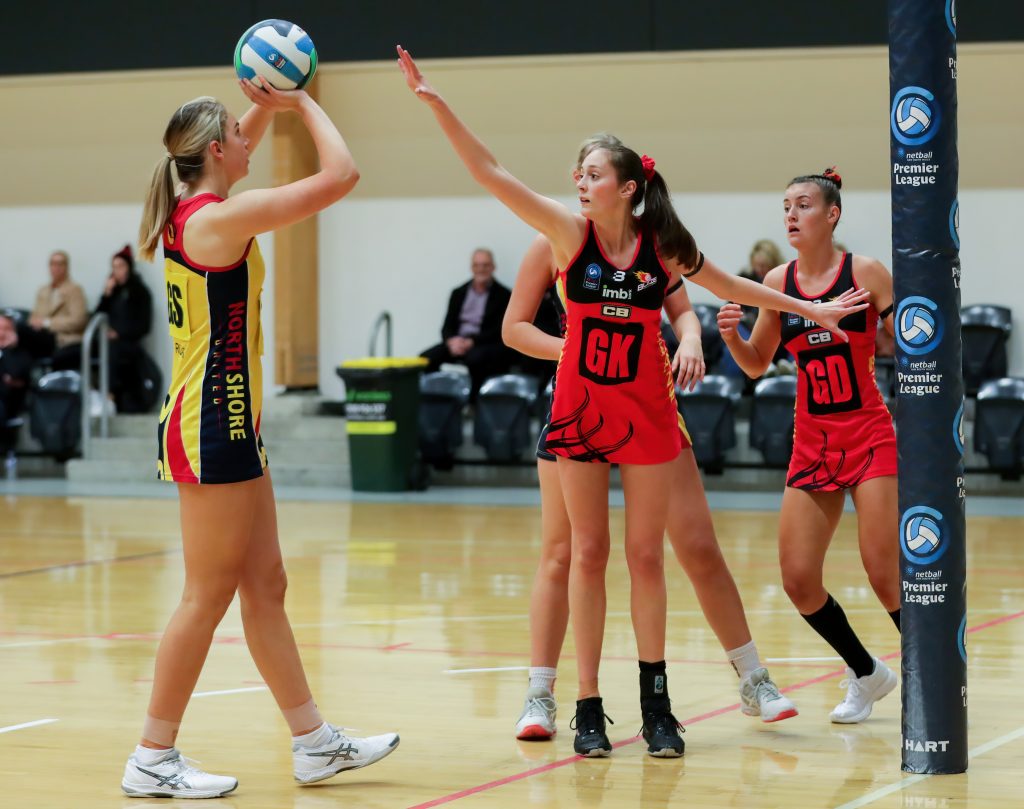 United missed its first three shots of the game, but eventually settled to take an early 1-4 lead.  Blaze were able to quickly catch back up by capitalising on some United errors in the goal end, making it 6-6.  Defensive pressure from Selene Chadrawy and Jessica Bowden, together with an impressive rebound from Sharnee Behr, saw Blaze secure a number of turnovers which were rewarded by the sharp shooting Ky-Mani Schwenke and Emily Dunn.  Blaze took the lead 9-7 before a couple of unforced errors by Blaze saw United level at 10-10 with two minutes remaining.  Loy entered the game at WA, but a relentless United defence end saw the ball turned over a couple of times with the tall United shooters making it count, taking a four goal lead heading into the first quarter (10-15).

Second quarter saw Mia Evans on as GA and Emily Dunn move into WA.  Blaze had the first centre pass, which United intercepted and this set the tone for the second quarter, with the score quickly blowing out to 10-21.  It took Blaze four minutes to score its first goal through Schwenke, but Blaze then went on a 5 goal run, bringing the score back to 15-21.  Annalise Chadrawy came on as GK and Blaze showed great speed down court through its attack end.  The rest of the second quarter went goal-for-goal, with Schwenke exhibiting exceptional offensive rebounding.  Half time score 22-28.

Third quarter began with Abbey Baker back into C and Emily Dunn to WA.  Blaze turned over the first United centre pass, before scoring three in a row and reducing the deficit to just three goals (25-28). The defensive combination of Annalise Chadrawy and Sharnee Behr fought tirelessly to get intercepts and rebounds, with Evans and Schwenke rewarding them in the shooting circle, however United’s defensive pressure was too much for Blaze, with United again getting ahead towards the end of the quarter.  Score heading into the break was 31-40.

The fourth quarter began the way the third quarter finished, with United turning the ball over in Blaze’s attack end.  Landrigan was injected into the game at GK and Selene Chadrawy returned to Centre.  Bowden and Chadrawy did their best in the defensive mid-court, but it was not enough to stem the flow of United goals, with Blaze going down 45 – 55.

The first quarter got out to a blistering start, with both teams showing great speed in transition.  The game went goal-for-goal until a Peti Talanoa rebound broke the deadlock, giving Blaze a one goal lead.  Talanoa was in everything, with the defensive pressure of Kayla Johnson forcing a held ball by United, taking the lead out to 10-8.  Te-Arn Bradley subbed onto GD, but despite their defensive efforts, United crept back into the game through some errors in the Blaze attack end.  Talanoa’s rebounding lkept them in the hunt, but Blaze headed into the first break down 14-16.

Second quarter saw Bradley drop back to GK, Holland return as GD and Katelyn Anderson enter the game as Centre.  Communication breakdown in Blaze’s attack end saw United extend its lead early to 16-22.  Dani DiBartolo (GA) and Elecia Parrott (WD) were both brought into the game during the second quarter.  Despite the best defensive efforts of Holland and Parrott, United extended its lead to 31-37 at half time.

The defensive combo of Bradley (GD) and Holland (GK) took to the court after half time and the teams went goal-for-goal to begin the third quarter, until United capitalised on a Kristina Brice missed goal, 34-43.  Despite a Kayla Johnson intercept that saw her crashing through the signage courtside, Blaze was unable to make any headway through United’s fast transitions down court.  Mallon (GA) and Talanoa (GK) returned mid-quarter, but United continued to intercept Blaze’s cross-court passes.  United’s exceptional shooting end rarely missed the opportunity to convert, taking the lead out to 39-58.

Holland (GD) and Chaise Vassallo (WA) returned for the last quarter and Blaze found a renewed sense of urgency, with Talanoa and Holland combining well in the defence end to bring the deficit to 49-64.  Johnson and Talanoa secured intercepts and the shooting combination of Brice and Mallon rewarded them.  Chelsea Bolton (WA) and Elecia Parrott (WD) entered towards the end of the quarter.  Late intercepts to Anderson, Parrott and Talanoa delivered ball back to the Blaze shooters to help reign in the lead, but it was too late. The final score 59 – 71.