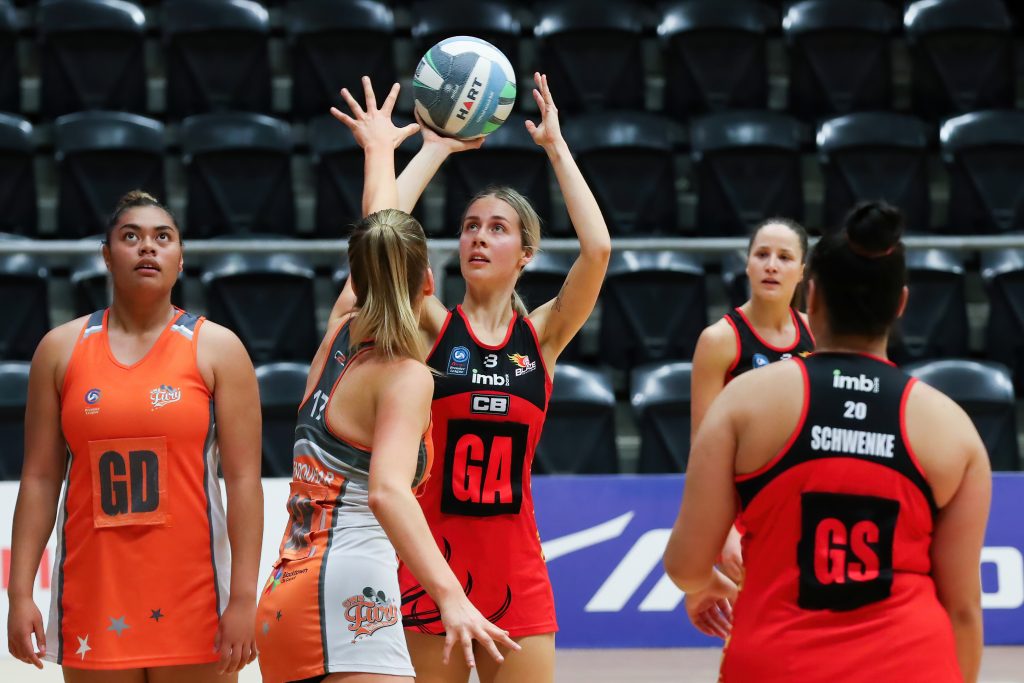 IMB South Coast Blaze U23s came into this match having defeated the Fury by 9 goals in their previous round 4 encounter and sitting two places above them on the ladder.

The match began with a goal for each team, but Blaze was the first to take the lead after the defenders took an intercept and the score went 3-1.

Smart passing choices by Bronnee Loy (WA) saw Blaze extend its lead to 9-5. Fury pegged back a couple of goals following an unfortunate shot by Ky-Mani Schwenke (GS).  Blaze again turned over the ball through a Selene Chadrawy (C) footwork error, but Emily Dunn (GA) took a spectacular mid-court intercept and scored to make it 11-7.  Abbey Baker came on as Centre with the score at 13-10.  Jessica Bowden’s (GD) great rebounding skills helped keep Fury from getting in front.  First-quarter score, 15-12.

There were no positional changes heading into the second quarter.  Fury scored from an early turnover, but Bronnee Loy (WA) threw a rocket pass into Ky-Mani Schwenke (GS) who scored, followed in quick succession by Emily Dunn (GA) to restore the lead to three goals, 18-15.  Mia Evans came into the match in GA and Selene Chadrawy returned as Centre.  Blaze continued to maintain its three-goal lead, but could not extend it.  Aimee Landrigan subbed on as GK with 5 minutes remaining in the first half.  Schwenke was called for a holding contact which gave Fury a turnover to level the score at 26 apiece.  Evans scored a long swish shot to take a one-goal lead and Annalise Chadrawy (GK) forced an offensive contact by Fury’s GS to deny them a levelling goal on the buzzer.  Halftime score, 27-26.

Following the halftime break, Chloe Burden started as GK and Emily Dunn returned, but in the WA position.  Fury came out firing and took an early 31-29 lead.  Abbey Baker returned as WA ten minutes into the third quarter and Emily Dunn moved back to GA.  Jessica Bowden’s (GD) intercepts helped Blaze catch back up at 32-32.  A Fury footwork call gave Blaze the turnover they were seeking, but they, unfortunately, lost it in the shooting circle.  Bronnee Loy returned in the Centre position and immediately took a mid-court intercept, however, Blaze was again unable to convert it into a goal.   Annalise Chadrawy came back as GK with two minutes remaining.  Neither team could break the deadlock until Jessica Bowden (GD) and Annalise Chadrawy (GK) combined to get an intercept and Emily Dunn (GA) scored with one second to go.  Third-quarter score, 40-39.

The Blaze lineup remained the same to get the fourth quarter underway and they scored the first goal, taking the score out to 41-39.  The Fury defenders were focusing their attention on Ky-Mani Schwenke (GS), but this simply allowed Emily Dunn (GA) to score the goals instead.  Another Fury footwork error gave Schwnke the chance to convert the turnover, which she did, and scored again quickly to make the score 47-43.  Momentum was with the Blaze when Selene Chadrawy returned as WD.  A Fury held ball penalty saw Schwenke score another two quick goals to extend the lead to 6 (50-44).  Sharnee Behr subbed on as WD with 6 minutes remaining.  Some unlucky mistakes from the Blaze saw Fury reduce the deficit to just 4 goals before Annalise Chadrawy (GK) drew an offensive contact from the Fury GS to give the ball back to Blaze and the score back to 53-47.  Fury made a late run and brought the margin down to 3 (54-51), but in the end, the experience and maturity of the Blaze players saw them remain calm and take the win.

IMB South Coast Blaze Opens headed into this match having lost to the Fury in their round 4 encounter by just four goals and sitting just one place below them on the ladder, however, this time round Blaze was without two of its defenders (Kayla Johnson and Peti Talanoa).

Blaze had the first centre. Kristina Brice (GS) scored the first goal of the game, taking Blaze to a 1-0 lead early in the match.  Fury intercepted the ball in Blaze’s goal circle and converted to take an early 1-3 lead.  Tegan Holland (GK) took a spectacular intercept shortly after and Brice rewarded to steady the score at 3-5.  Fury nabbed another break thanks to some unlucky passes from Blaze to extend the score to 3-6.  The Blaze defenders came away with another intercept, with the ball sent down the court at speed and Shelby Mallon (GA) scored a long swish goal to make it a one-point game at 5-6.  Tegan Holland (GK) showed great rebounding skills to keep Blaze in touch, but a held ball penalty to Taylah Davies (WA) gave Fury a further break and saw the score creep out to 6-10.  The Blaze defensive combination of Tegan Holland and Te-Arn Bradley did their best to get turnovers, but Kristina Brice (GS) was struggling with shooting accuracy and couldn’t convert those turnovers.  Fury got on a run with increased defensive pressure and accurate shooting and the lead quickly blew out to ten (10-20).  Brice scored a goal just before the break to make it 11-20.

Abbey McFadden was injected into the game as GA for the second quarter, with Shelby Mallon replacing Kristina Brice at GS.  Abbey’s speed in and around the goal circle sparked a resurgence in the Blaze players and they quickly fought back to just a six-goal deficit (19-25).  Te-Arn Bradley (GD) took a huge intercept, but an offensive contact penalty against Taylah Davies (WA) saw the ball back with Fury who scored to make it 19-27.  Elecia Parrott (WD) claimed a flying intercept on the circle edge, but the ball was lost in the mid-court and Fury scored 19-28.  With 5 minutes remaining, Brice returned to GS.  Lauren Russell was brought on as GK and Tegan Holland moved out to GD.  Russell made an immediate impact with an intercept allowing Blaze to stem the flow of Fury goals.  The second-quarter goals were level, with the halftime score 24-33.

Half time saw a couple of changes for Blaze, with Chaise Vassallo making an appearance as Centre and Te-Arn Bradley back on as GK.  The quarter began with teams going goal-for-goal before Abbey McFadden slipped over and was replaced by Shelby Mallon in GA.  Mid-court defensive pressure from Taylah Davies (WA) and Chaise Vassallo (C) forced Fury to throw the ball over the sideline, but Fury then intercepted Vassallo’s pass and took the score out to 27-37.  Mallon missed the next goal and fury capitalised, extending its lead to 11.  Tegan Holland (GD) claimed another intercept, with Kristina Brice (GS) scoring from a precision pass in from Vassallo.  She scored again quickly to bring the score back to 29-38.  From here on in, the third quarter went downhill for Blaze.  Brice missed another goal and Fury scored two in succession to make it 29-42.  Brice was then penalised for an offensive contact and Fury scored another two, 29-43.  Dani Di Bartolo was brought on to replace Brice as GS with 6 minutes to go in the third quarter.  Katelyn Anderson returned as Centre with 4 minutes remaining, but it did little to help stop the slide.  Miscommunication in the attack end saw Fury get turnovers and the score quickly blew out to 31-51.  Taylah Davies (WA) and Elecia Parrott (WD) hustled in the midcourt to get turnovers, but the margin remained at 20 heading into the break (32-52).

The fourth quarter began with Kristina Brice back on as GS and Shelby Mallon as GA.  Despite some good connections between Brice and Mallon, and some defensive prowess from Tegan Holland (GD), Fury continued to extend its lead.  Chaise Vassallo replaced Davies as WA with 6 minutes remaining.  Dani Di Bartolo came on as GA and Lauren Russell as WD with about 5 minutes left in the game and Blaze went on a 4-goal run to make the score 47-70, but it was too little too late.