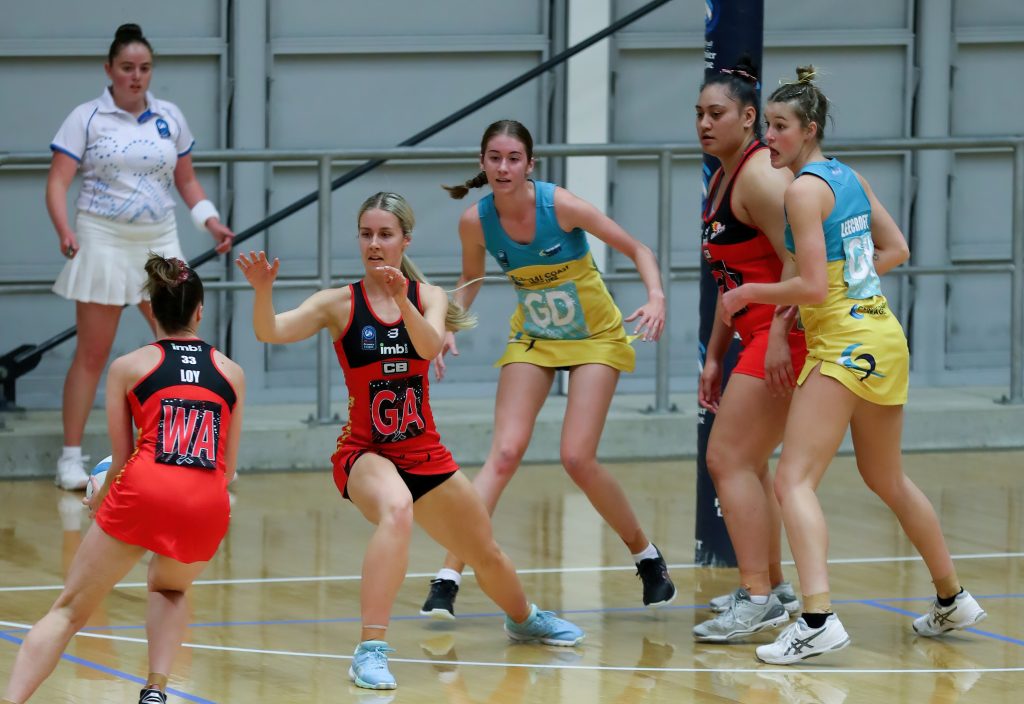 A stunning performance by the IMB South Coast Blaze Under 23s, spearheaded by Goal Shooter Ky-Mani Schwenke, resulted in a convincing victory over the Central Coast Heart in the Premier League’s Indigenous Round.

Central Coast Heart came into the match having won their first and only game last week, however you would not have known it from their first quarter performance.  It was a speedy start, with both teams moving the ball down the court at pace.  Crucial intercepts by the Chadrawy sisters saw Blaze creep ahead, with pin point accurate feeds into the shooting circle giving Blaze the edge over Central Coast.  The Cluch TV commentators said Blaze gave them a “West Coast Fever vibe”.  Baker was injected into the game at the Centre position, continuing the impressive deliveries into the shooters, along with Loy who took heavy contact from the opposition.  Blaze headed in the first break up 18-13.

An early intercept by Central Coast at the start of the second quarter reduced the margin to just 3.  Evans came on as GA to replace Dunn after a collision with her opponent.  The Chadrawy sisters again continued to wreak havoc in the defensive end, pushing Blaze’s lead out to 8.  Dunn returned to the court shortly after in the WA position, with Burden on as GK.  Central Coast kept up its defensive pressure, reducing the margin to 6.  Half time score was 29-23.

The third quarter was where Blaze managed to inflict the most damage.  S. Chadrawy began the quarter in Centre, with Baker on as WA, Landrigan as GK and Yealland back as WD.  Landrigan made an early impact by cleaning up a loose ball.  Blaze’s attack end continued to connect well, getting out to an early 10 goal lead.  Intercepts by S. Chadrawy, coupled with Landrigan’s rebounding, quickly saw the lead extend to 14.  Blaze was presenting multiple options in attack and Central Coast was unable to penetrate Blaze’s defence end.  Blaze capitalised on all turnovers, heading into the third break up 46-30.

The fourth quarter saw Loy begin as Centre, Burden as GK and Dunn back into GA.  Loy impressed early with her speed, pouncing on every loose ball.  Burden’s rebounding efforts and the team’s seamless transitions downcourt saw Blaze extend its lead to 19 early in the fourth quarter (50-31) .  Blaze continued to dominate until Central Coast pegged a few goals back due to wayward passes from Blaze (51-34).  With approximately 4 minutes remaining, S. Chadrawy returned to the Centre position, Loy to WA and Farrow took over as GS.  Following an impressive intercept by Burden, Farrow converted and continued to land her shots.  She scored a penalty shot after the buzzer to bring the final margin to 19, with Blaze winning 60 – 40.

Our IMB South Coast Blaze Opens came out blazing but couldn’t hold Central Coast Heart back in Indigenous Round.

Central Coast was first to score heading into the second quarter.  Two minutes into the quarter, Johnson went down with what appeared to be an ankle injury and did not return to the court for the rest of the game.  Parrott was brought on to replace her at WD.  Central Coast’s physical defence end broke the deadlock to get out to an early 4 goal lead.  Holland’s rebounds and Parrott’s defensive pressure around the circle edge kept Blaze in the hunt.  Holland was moved out to GD and Talanoa brought on as GK.  A few missed shots by Blaze saw Central Coast take a 6 goal lead (18-24).  The attack end’s feeds into the circle started to fail and Bolton was brought into her first game of the season at WA.  Half time score 22-30.

The same lineup continued into the third quarter.  Connections in the attack end continued to cause concern for Blaze, with Central Coast pushing out to a 13 goal lead (23-36).  McFadden returned as GA.  Parrott did her best to rally her teammates and took a stunning intercept off a Central Coast centre pass.  Blaze cut the deficit to 11 but could not capitalise on the rare errors made by Central Coast.  Vassallo returned to the Centre position and Davies moved out to WA.  Intercepts by Parrott and Talanoa gave hope towards the end of the quarter, but the attack end failed to convert them into goals.  Score at three quarter time, 31-43.

Parrott again intercepted the ball off an early Central Coast centre pass and Brice converted to bring the margin back to 10 (35-45).  Parrott continued her defensive efforts throughout the fourth quarter.  With 11 minutes remaining, Bradley returned to the Court as GD, with Holland back to GK.  Blaze contested every single pass, desperate for turnovers.  Di Bartolo was brought into the match with 4 minutes remaining, immediately connecting with a long feed into Brice.  Despite Blaze’s continued defensive efforts, Central Coast increased its lead.  Brice scored a goal on the buzzer to bring the margin to 16. The final score 46 – 62.