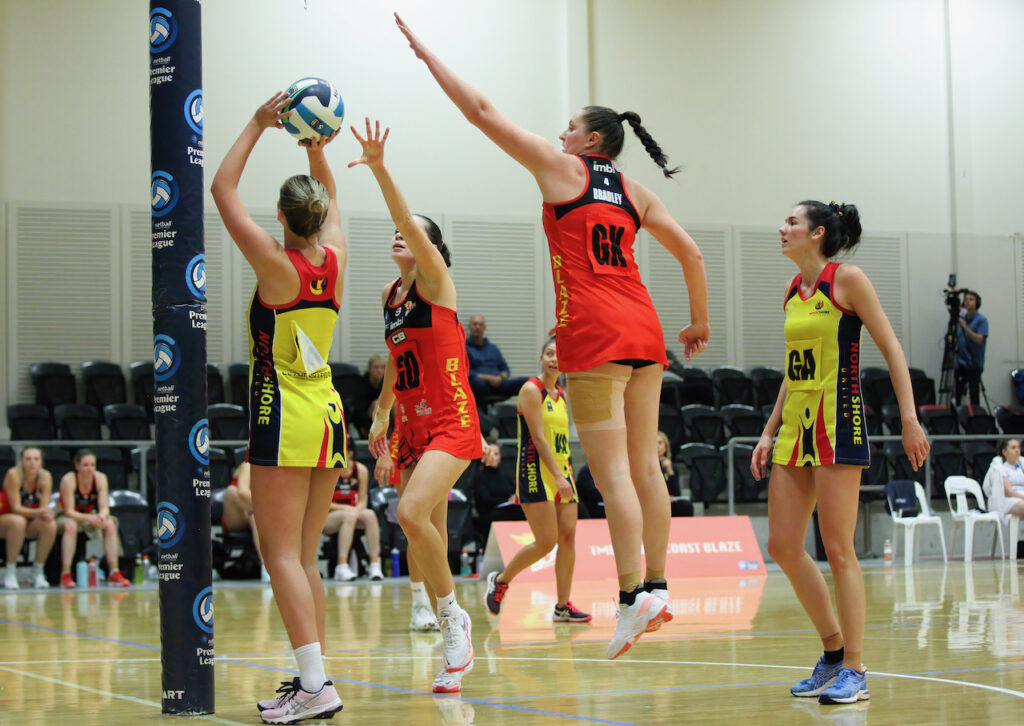 The Round 5 game between the South Coast Blaze and North Shore United was guaranteed to leave viewers on the edge of their seats as third on the ladder took on fourth. Despite a nine-goal deficit in the first break, the Blaze fought back to level the scores in the third quarter, leading to a thrilling final quarter.

North Shore were strong out of the blocks taking an early four-goal lead. The Blaze defenders were faced with the challenge of shutting down Giants Netball shooter, Matisse Letherbarrow, however, they were prepared, and built pressure on the United attackers. North Shore United struggled to shut down Brice’s strong presence in the circle as she remained consistent, keeping Blaze in the game to finish the first quarter 11-19 in favour of United.

The Blaze started the second quarter strong as they slotted the first three goals of the term. The team worked tirelessly to fight back North Shore’s lead, however, they struggled to capitalize on early turnovers. Despite this, they were able to continue building pressure, to only trail by two goals heading into halftime (29-27).

The Blaze took their first lead for the game ninety seconds into the third quarter. Mallon played an incredible game at Goal Attack connecting well with Brice, as they continued to show off the shooter-to-shooter connection the Blaze are known for. Despite United being able to take a four-goal lead, the Blaze kept fighting to level the scores 44 all at the end of the third quarter.

Eaton seemed to be involved in everything in the final quarter, monumental in the Blaze’s performance last night. The two teams could not be split as the ball was passed back and forth as neither could take the lead. United held the largest lead of the quarter with two goals, however, it was quickly diminished by the Blaze. Despite the best defensive efforts of the Blaze, United came out on top as the result of a costly turnover.

The U23s showcased their skill and talent in Round 5, taking home a strong win against North Shore United, and securing them top spot on the premiership ladder.

North Shore United started the game firing with strong defence, as the Blaze struggled to bring the ball downcourt. Bronnee Loy was monumental in bringing Blaze into the game and settling the team as she worked vigorously in both attack and defence. Papi Alaalatoa was a calm goal for the feeders, with amazing shooting under pressure. Their strong presence on the court allowed the Blaze to gain a four-goal lead, finishing the first quarter 14-10.

Eaton and Mateo were both influential in the second quarter defensive end as they gained essential intercepts, allowing the Blaze to extend their lead. Evens had a massive game in goal attack gaining multiple intercepts and controlling the ball down the court with powerful drives. The Blaze increased their lead after a strong performance, leading 34-15 at halftime.

Alaalatoa was unstoppable in the circle as the feeders found her presence easily. Despite a twenty-goal deficit North Shore United didn’t give up, continuing to build pressure and contest every ball. Amy Younie shone in her premier league debut as the Blaze finished the quarter 52-24.

The Blaze front end showed a strong connection as they patiently passed the ball between each other until reaching the post. The Blaze remained solid in defence preventing the ball from reaching United’s goal third for most of the quarter. The Blaze kept United to five goals in the final quarter to finish the game 67-29.