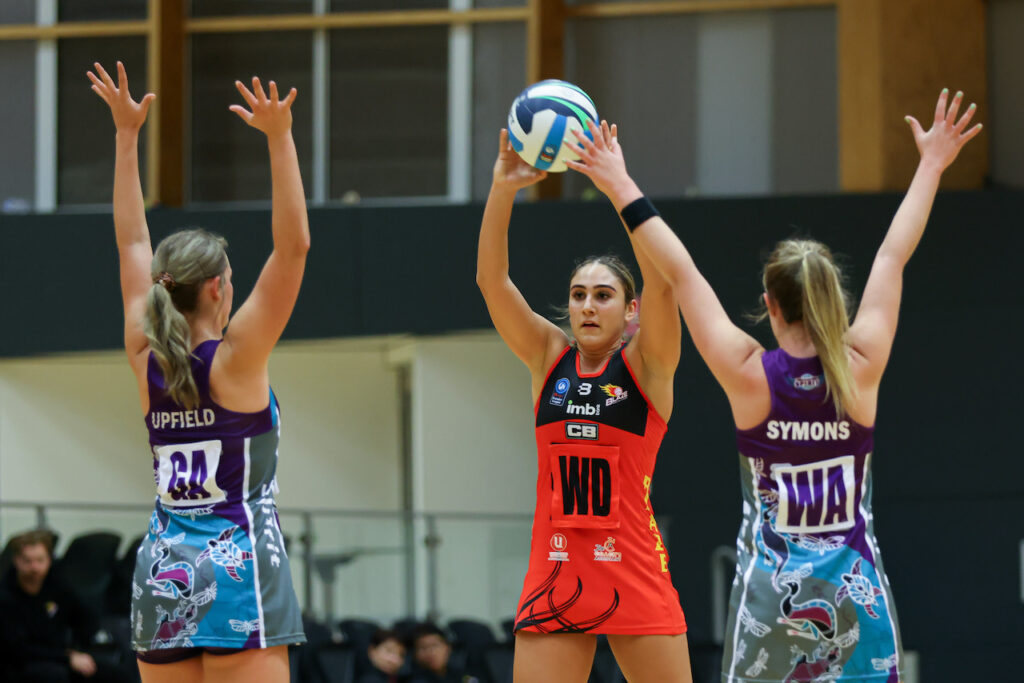 The Opens Blaze team were able to take a strong lead in the third quarter after trailing for the first portion of the game, allowing them to hold onto their top-four spot on the ladder.

The ball was passed back and forth as both teams tried to settle into the game. The Blaze’s attacking end appeared disjointed in the opening minutes as multiple balls were thrown over the sideline, despite Brice’s strong presence for feeders under the post. The Blaze defence was firing as they were able to apply pressure to every pass from the Spirit. Captain Katelyn Anderson provided options in both attack and defence for the Blaze team as she was fluent down court. After a strong opening term from the spirit, the Blaze trail 16-13 at quarter time.

The Blaze scored the first seven goals of the second quarter, taking a strong lead early. Davies did a mountain of work in both the goal third and in defence on the transverse line. The Blaze defenders did well to keep the Spirit shooters out of the circle, however, they proved their accuracy from distance. Bower’s work in Goal Defence helped the Blaze to a 29-23 lead at halftime.

The Blaze defence did well to turn the Spirit’s ball over, then capitalise on it in attack. Mallon and Brice connected seamlessly in the circle, feeding each other with confidence. McFadden provided a dominant option in attack with strong dodges to lose her player. The Blaze were able to apply pressure down the court, preventing the Spirit from passing the ball off easily. After a dominant third term, the Blaze lead 50-35 heading into the final quarter.

Despite their strong lead, the Blaze came out of the final break firing as they were able to force turnovers in defence and penalise in attack. The Blaze’s quick ball movement meant the Spirit defenders were unable to keep up as they doubted themselves. Bowler made her presence known in the final quarter as she was able to gain deflections for the Blaze. The Blaze secured the win with a score of 80-41.

The U23s Blaze team were able to maintain their hold on the top spot of the ladder as they took home another strong win against The Central Spirits.

The Blaze started the game strong as they turned over the Spirit’s first center pass to score. The Blaze were able to apply pressure early, as the Spirit’s shooters seemed unsettled, contrary to the Blaze’s quick paths to the post and willingness to shoot. Jade Dawson was fluent in center as she carried the ball down court, while Gabby Eaton backed her up in Wing Defense with her defensive presence. The Blaze lead 14-8 at the first break.

The shooter-to-shooter connection between the Blaze’s front end was again proving difficult to stop for opposition defenders. The Blaze proved too quick for themselves as they struggled to capitalize on turnovers, often finding themselves forcing passes in the front end. Unfortunately, the Blaze struggled to remain consistent this quarter as they appeared unsettled in the front end. Despite this, they maintained a lead of 27-19 at halftime.

The Blaze worked tirelessly in defense as they put pressure on every play the Spirit made. Despite an 8-goal deficit, the Capital were able to maintain pressure on the Blaze as both teams remained unsettled. The Spirit shooters were accurate from range, sinking a majority of their shots from mid-range. The Spirit were reluctant to give the ball, a credit to the Blaze’s intensity in defense. After undisciplined quarters from both teams, the Blaze held onto their lead, 39-27 going into the final term.

A change in line-ups for the Spirit seemed to work for them in the last quarter as they tried to bite back at the Blaze’s lead. The Blaze remained calm as they continued grinding out the opposition, putting in a full team effort. The Blaze kept possession of the ball as they were able to capitalise on turnovers from the Spirit. A dominant performance led the Blaze to finish the game 54-34.