#OurBlaze to host our first ever HOME GAME in Round 9! 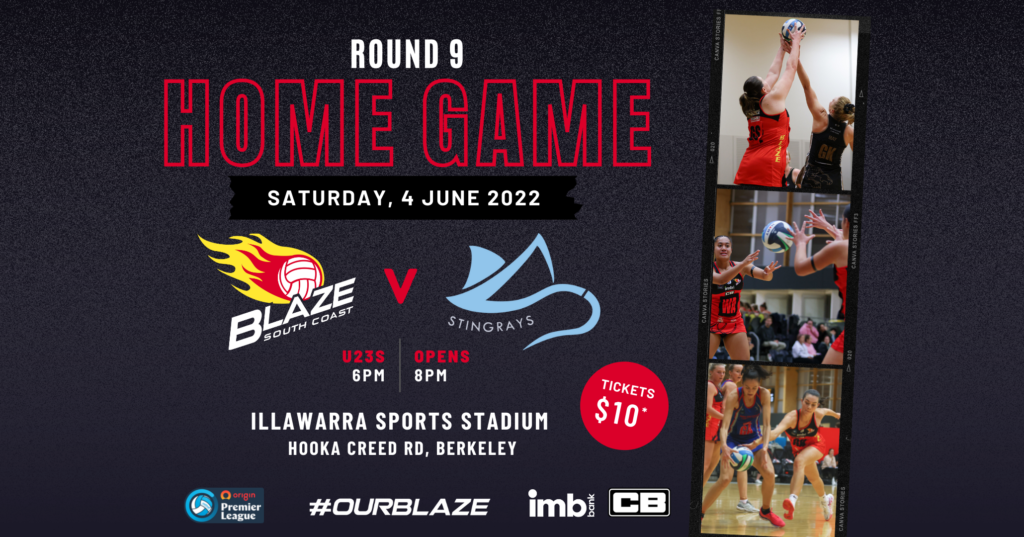 It’s the first home game the Illawarra-based netball franchise has hosted since its inception in 2019, with COVID-19 interrupting the 2020 and 2021 seasons.

IMB South Coast Blaze Chairperson, Karina Franke, is calling on the Illawarra community to get behind the Blaze on Saturday 4 June and watch the local rivals take to the court for Round 9 of the Netball NSW Premier League.

“Our U23s and Opens teams have had fantastic starts to the 2022 season and to have the opportunity to watch netball teams of this calibre play in the Illawarra is really exciting,” Ms Franke said.

“We have a limited number of tickets available to watch our Blaze take on the Stingrays and we’d love to see a crowd decked out in red, white, yellow and black, cheering the players on.

“The Sutherland Stingrays are a competitive team and spectators will be guaranteed two thrilling games of netball.”

Opens mid-courter Chelsea Bolton has been a part of the Blaze from the beginning, said she couldn’t wait to compete on home soil.

“Playing at home means a lot. Most of us are local girls and we can’t wait to play in front of our family and friends. I feel like it probably should have happened earlier, but at least it’s happening now. The girls are really pumped, it just makes this game a little more special. And hopefully it can happen more often in the seasons to come,” Bolton said.

NSW Men’s Netball representative, Grant Maling, will be the MC and commentate both matches.

Tickets for the IMB South Coast Blaze home game are $10 (plus booking fee) and will include two games of netball. Doors open at 5:30pm. UPDATE – THIS EVENT IS SOLD OUT.

Tickets can be purchased through Eventbrite and the South Coast Blaze website. Illawarra Sports Stadium is located at Hooka Creek Road, Berkeley.