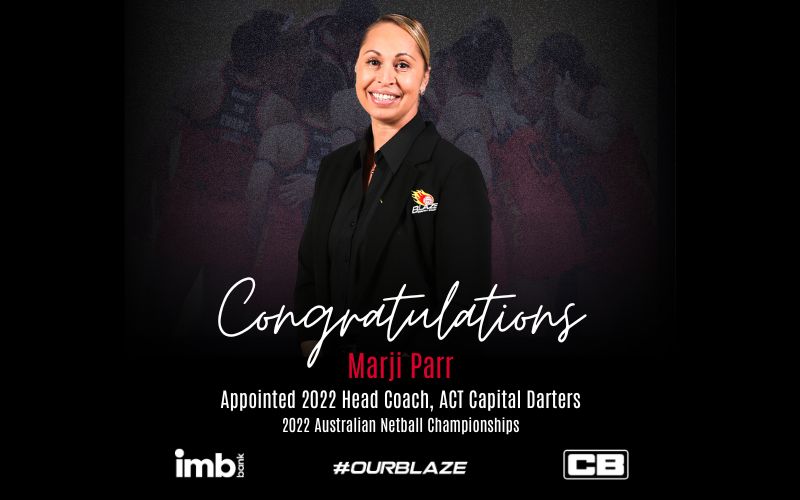 A former Darter herself, Marji will lead the Darters to the inaugural Australian Netball Championships (ANC) taking place in Traralgon, Victoria, between 22 and 28 August 2022. Marji takes on this role in addition to her position with IMB South Coast Blaze.

The ANC will consist of a tournament-style format and be fought out between 10 teams from state and territory Member Organisations and Suncorp Super Netball League clubs.

The event aims to bring together all of Australia’s emerging netball talent, including athletes, coaches, umpires and officials, for talent identification and development looking toward Suncorp Super Netball and international levels.

Marji takes on this role in addition to her #OurBlaze coaching position. Netball ACT’s High Performance Manager Kate Carpenter says Netball ACT is excited about the impact that Marji will make to the 2022 Capital Darters campaign.

“Marji has an impressive playing career as a former Fijian international competing in two World Cups. She has progressed through the Netball NSW coaching pathway, now an elite coach, coaching at Opens Level in the NNSW Origin Energy Premier League,” Carpenter said.

“As a highly experienced, knowledgeable and engaging coach Marji will be able to draw on her existing connections within the ACT community.”

Congratulations, Marji! Your #OurBlaze family are thrilled for your well-deserved appointment, and can’t wait to watch you and the Darters shine bright at the Championships this August. ✨