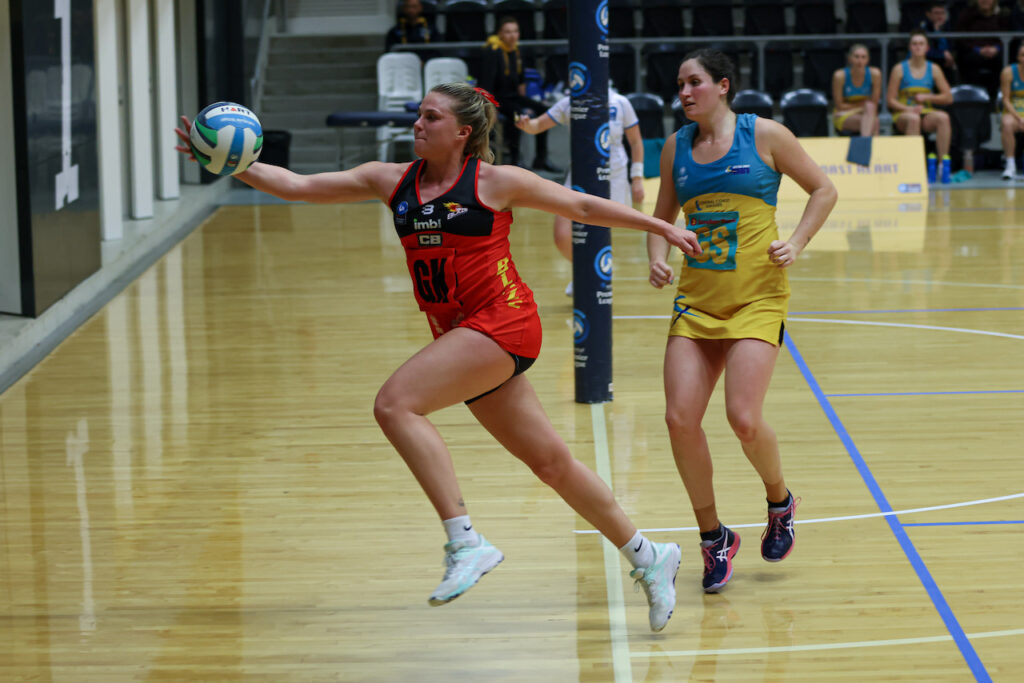 Summary:
This physical game saw South Coast Blaze Opens take on Central Coast Heart for a do or die semi-final. This was the first time in Blaze history that the Opens have made the finals. While they fought hard to keep the score line even, they couldn’t catch up by the final quarter and went down by 13 goals. After an excellent season from the Opens, they’ve now finished the competition for 2022. Two Opens players, Taylah Davies and Maddy Eaton, have been selected in the Capital Darters Australian Netball Championships (ANC) team to play in August 2022.

First quarter
It was a tight first quarter and for the first five minutes the score was tied. Efficient triangle work was on display from Blaze in the goal circle between Maddy Eaton, Shelby Mallon and Kristina Brice. Katelyn Anderson was very steady and was always available as a backup option. Anderson has brought a wealth of experience to the Opens during the 2022 season, and this was on display during the game. The defensive switch up between Bower and Holland worked well, with Hart’s shooters working hard to score.

Second quarter
The second quarter was frantic from both teams, with finals nerves making themselves seen. There was a solid crowd at the match and the atmosphere was loud! Heart took the lead at the 12-minute mark, with Aisha Bower doing an amazing job in defence. Despite the strong Blaze defence, the Heart slowly crept to a four goal lead. Selene Chadrawy played a strong second quarter, she applied lots of pressure and kept up with the speed of her opponent. It was a strong physical battle with both teams giving everything they had. Shelby Mallon, Taylah Davies and Kristina Brice connected beautifully in the goal circle. As the quarter drew towards a close the Blaze faded a little bit, with some intercepts from Heart breaking Blaze’s momentum.

3rd quarter
Taylah Davies was on fire in the third quarter, her athleticism on display as she
continually contested balls and went for everything she possibly could. Unfortunately, a few costly errors from Blaze allowed Heart to capitalise on turnovers and build their lead in this quarter. Blaze made lots of positional changes (rolling subs) and some players appeared to find it difficult to settle. Strong drives from Mallon in the circle resulted in Blaze getting a small roll on. Chelsea Bolton entered the game in WA and played well, keeping the Blaze within reach of the Heart’s score by feeding the circle well. Te-Arn Bradley played well in GD
and was a stand out. Blaze appeared stuck in the midcourt, with no-one driving onto the ball and hesitating on their passes. The stopping and starting and loss of momentum with passes saw the score line start to blow out. Bower was exceptional in the circle and pushed hard to contest every ball.

4th quarter
Calm and clever movement of the ball by Hart saw them gain momentum in the final quarter, increasing their lead. Soft passes by Blaze were turned over quickly by the sharp Heart defence who pick them off with ease. It was a fast and hard game but Heart were too strong in the fourth. Blaze defenders were exciting to watch from start to finish and they never stopped contesting until the final whistle blew. It was a disappointing end for the Blaze Opens, with injury and illness causing disruption to Blaze’s season and momentum towards the end of the 2022 competition.

Though not the result we hoped for this week, it’s hard to stay disappointed too long. What an incredible 2022 season from our Opens! Despite the disruption and challenges thrown their way week to week through injury and illness, Opens showed amazing resilience. They remained focussed and united, and their determination and strength was on full display each and every week.

Congratulations to all #OurBlaze Opens athletes, and to Marji and her coaching and management team on an incredible 2022 season. We’re so proud of everything you achieved and it’s been a pleasure to watch you all BLAZE this season. We can’t wait to see what’s to come in Season 2023!

A top of the table thriller played out as first placed #OurBlaze U23s took on the competition’s second placed Sutherland Stingrays. With their most recent encounter ending in a Draw, both teams were hungry for a first round finals series win. Despite leading the match for the first three and a half quarters, the Stingrays came to life in the dying minutes of the game to steal the win by two goals.

A strong start from both sides produced a low-scoring first quarter as both teams went goal for goal. The exceptional patience on the goal circle edge from Captain Clare McCrohon, and WA Linday Tui, saw Blaze skillfully feed GS Papi Alaalatoa, who remained unwavered by the double teaming of her by Stingrays defenders and the physicality of the goal circle. GA Mia Evans worked hard creating space for Alaalatoa, and GK Emma Mateo applied excellent pressure, making Stingrays shooters work hard for every ball.

The Blaze lineup remained unchanged leading into the second. Fresh legs in C Kiah Yealland brought a renewed energy, and exceptional athleticism from GD Sharnee Behr produced a number of well-timed intercepts, swinging the momentum in favour of Blaze and producing some excellent passages of team play across the court. The Stingrays, playing in their first finals match since 2016, held on despite the momentum shift and solid circle work from their GS kept the scoreline close despite their growing penalty count at both ends of the court.

Following the break, GK Ash Selywn entered the match and worked hard to slow the growing confidence of the Stingray’s GS. A misfeed from Blaze early in the third saw momentum switch in favour of the Stingrays and within minutes they had capitalised and the score was back to level. WD Gabby Eaton’s impressive speed and change of direction made things difficult for her opponent, while GA Manaia Mete, who entered the game in the third, used her fast hands and clever ball skills to keep Stingrays defenders guessing. Relentless hands over pressure right across the court, in particular from experienced and reliable defender Jess Bowden, helped Blaze retain a marginal lead of two goals.

Fourth Quarter
Ana Afoa entered the game in GK, hoping to mix things up and shut down the Stingray’s threatening GS. The combination of Tui, McCrohon and Mete continued to gel through the final quarter as they worked hard to move the ball into the reliable hands of Alaalatoa. Blaze’s defensive powerhouse of Mateo, Bowden and Behr kept the Stingrays goal count at bay and with five minutes remaining in the game, Blaze led by four. However, like the last time Blaze and Stingrays meet, the Stingrays came to life with just four and a half minutes on the clock, and a fast but furious final momentum swing saw the Stingrays score six consecutive goals at pace and steal the win by 2.