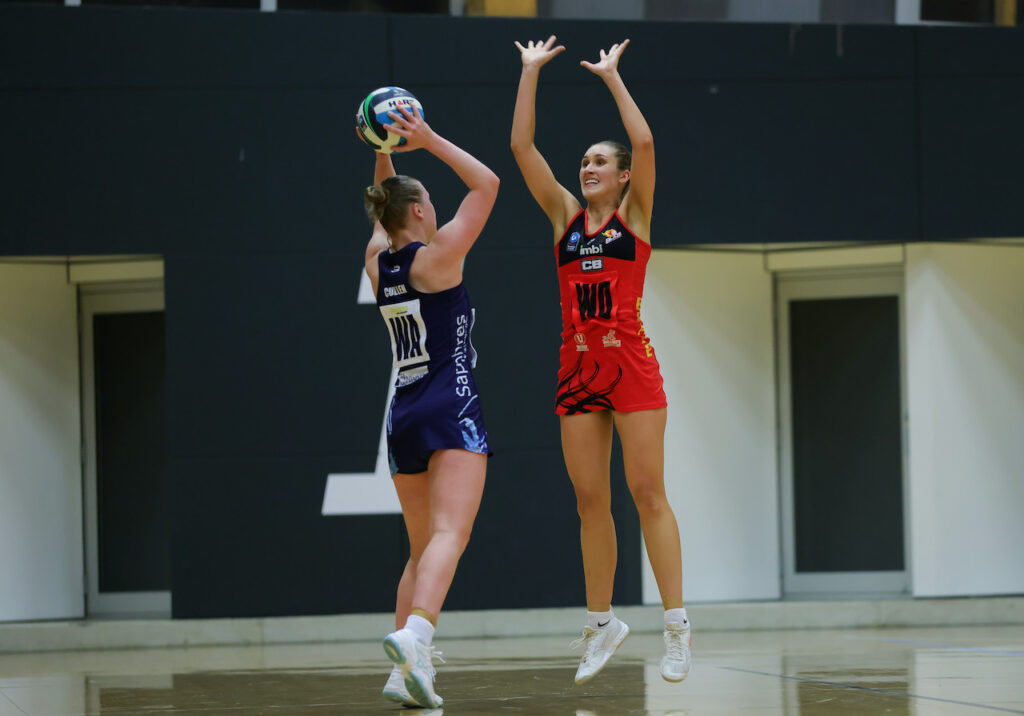 U23s Vice-captain Jess Bowden gives it everything in defence

Although the Blaze had top spot on the ladder locked in, a win for the Manly Warringah Sapphires would see them jump UTS Sparks and take 2nd place in their Conference heading into finals. A strong first quarter from the Blaze set them up well for the game however the intensity from Sapphires showed, bringing a hard fight to the Blaze, particularly in the third quarter, before ultimately going down 53-46 at the final whistle.

The Sapphires started the second quarter strong bringing the deficit back to 1 just three minutes into the Quarter. Gabby Eaton and Emma Mateo entered the game in WD with Jess Bowden moving into GD. A back and forth tousle in the second quarter saw Blaze maintain their lead but the gap fluctuate from 1 goal to 6 goals throughout, finishing the half leading the Sapphires 30-25.

Another strong start to the quarter and some strong shooter to shooter play saw the Sapphires draw level 2 minutes into the quarter. Newcomer Menaia Mete came onto the court in GA and Kiah Yelland into C moving Captain Clare McCrohon into WA. A few ill disciplined plays from the Blaze and a strong defensive effort from Manly saw the Sapphires take the lead by one half way through the quarter. The tousle continued with the scores level 38-38 at the three quarter break.

Returning to the tried and tested first quarter combination, the Blaze slowly extended their lead once including a strong second half of the quarter proving too strong for the Sapphires finishing 53-46 winners.

A HUGE congratulations to our U23s who, as a result of this match, finish the regular Origin Energy Premier League season on top of the U23s competition ladder!